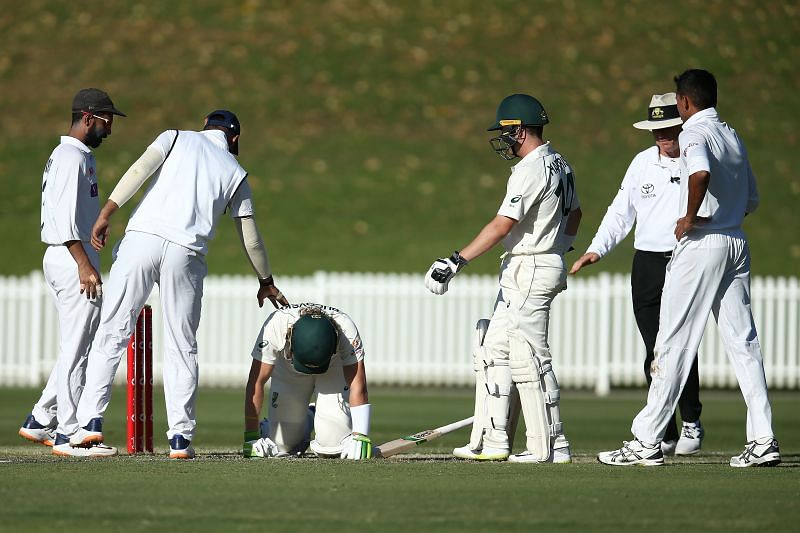 Australia‘s rising star Will Pucovski walked off the field after a short delivery from Kartik Tyagi hit him on the helmet. This incident happened during the fourth innings of the recently-concluded practice match between Australia A and India A.

After India A declared their second innings at 189/9, Australia A were set a target of 131 to get within 15 overs. Will Pucovski opened the innings with Joe Burns, but unfortunately for the hosts, Burns chopped a delivery from Umesh Yadav onto his stumps in the first over of the chase.

However, Pucovski stabilized the innings with Marcus Harris. The two batsmen added 41 runs for the second wicket before Kartik Tyagi’s bouncer forced Will to retire hurt.

The right-handed batsman misjudged a quick delivery as it hit him hard on his helmet and rolled away to third man. After taking the hit, Will Pucovski lost balance for a while as his partner Harris, the umpire, and the Indian cricketers rushed to check on him.

After an initial struggled to get back on his feet, he walked off gingerly with the Australian support staff giving him company. Travis Head replaced the youngster for the last few overs as the match ended in a draw.

Will Pucovski has had previous run-ins with mental issues, those which have delayed his international bowl for Australia. With Burns failing to find form, and David Warner in doubt for the first Test due to injury, Pucovski is in line to make his debut against India in the first Test on December 17 in Adelaide.

The cricket fans await an official medical update on the 22-year-old from Victoria.

Upcoming Australian opener Will Pucovski, who missed the Adelaide Test because of a concussion, has been ruled out of the Boxing Day Test as well.

Former Aussie opener Chris Rogers is confident that young Will Pucovski can bounce back following the concussion that will keep him out of the Adelaide Test against India.

The ongoing Border-Gavaskar Trophy continues to be marred by injuries as Will Pucovski was taken for scans on the final day of the Sydney Test. The debutant injured his shoulder while trying to stop the ball at mid-wicket in the second session of the final day.

Young fast bowler Kartik Tyagi has revealed that he was petrified when he hit both Will Pucovski and Mayank Agarwal during the recently-concluded India’s tour of Australia.