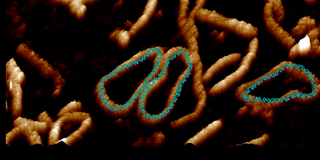 Scientists recently captured a high-resolution video of DNA shimmying into weird shapes in order to squeeze inside cells.

In 1952, Rosalind Franklin produced the first indirect picture of DNA by studying how X-rays bounce off these fundamental molecules. But it wasn’t until 2012 that scientists captured a direct photo of DNA using an electron microscope, Live Science previously reported.

Now, a group of researchers in the United Kingdom has captured high-definition videos of DNA in motion using a combination of advanced microscopy and simulations. But they weren’t just playing paparazzi to the building blocks of life — they were trying to understand how DNA moves to squeeze itself into cells.

Human cells contain about 6.6 feet (2 meters) of DNA. Considering human cells are on the order of micrometers, DNA has to be really good at “supercoiling” or bending and folding itself to tightly pack inside the cell. But until recently, technology wasn’t good enough for scientists to clearly see what the DNA structure looked like as it supercoiled, the authors wrote in the study.

To answer this question, the new study’s authors looked to “DNA minicircles” isolated and engineered from bacteria. These circular DNA structures are also found in human cells, and their function is largely unknown. The researchers used these ring structures because scientists can twist them in a way that wouldn’t have worked with long strands, DNA’s most common form, according to a statement.

To see the movements in detail, the researchers used a combination of supercomputer simulations and atomic force microscopy, in which a sharp tip glides across the surface of the molecule and measures the forces pushing back on the tip to outline the structure.

“Seeing is believing, but with something as small as DNA, seeing the helical structure of the entire DNA molecule was extremely challenging,” study lead author Alice Pyne, a lecturer in polymers and soft matter at the University of Sheffield in the U.K., who captured the new footage, said in the statement. “The videos we have developed enable us to observe DNA twisting in a level of detail that has never been seen before.”

The microscope images were so detailed that they could see the double-helix structure of the DNA. After researchers combined these images with simulations, they could see the position of every single atom in the DNA as it moved, according to the statement.

Interestingly, DNA in its relaxed form barely moved. But when twisted —  as it normally does when squeezing into a cell — the DNA morphed into many other shapes, according to the statement. These various shapes influenced how the DNA molecule interacted with and bound to other DNA molecules around it, the authors wrote in the paper.

Lynn Zechiedrich, a professor at the Baylor College of Medicine in Houston, Texas, who provided the minicircles for the study, previously discovered how to use these ring structures as vectors for gene therapy by inserting small genetic messages into the rings.

The study researchers “have developed a technique that reveals in remarkable detail how wrinkled, bubbled, kinked, denatured and strangely shaped they are,” Zechiedrich, who wasn’t directly involved in the study, said in the statement. “We have to understand how supercoiling, which is so important for DNA activities in cells, affects DNA in hope that we can learn how to mimic or control it someday.”

The findings were published Tuesday (Feb. 16) in the journal Nature Communications.

COVID-19 has caused millions of more illnesses than its predecessor, SARS, even though both diseases are caused by similar coronaviruses. Now, a new study suggests one reason why SARS-CoV-2, the virus that causes COVID-19, is much more transmissible than SARS-CoV-1, which causes SARS.

Scientists have measured the shortest unit of time ever: the time it takes a light particle to cross a hydrogen molecule.

For months, scientists have wondered whether past exposure to seasonal coronaviruses that cause common colds might prevent people from getting a severe case of COVID-19.

Some sperm cells are ruthless manipulators that will literally poison their competition in the race to fertilize an egg, new research shows.

A neon-yellow slime mold can store memories, even though it lacks a nervous system. Now, scientists have found a new clue as to how the brainless blob manages this impressive feat.