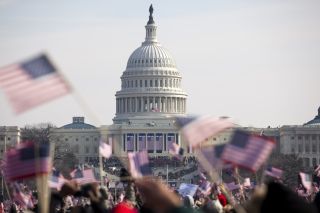 Photo of the U.S. Capitol behind of a crowd waving American flags at President Obama’s inauguration on Jan. 20, 2009.
(Image credit: carterdayne/Getty Images)

While 10 weeks may seem like a long wait, past presidents had to contend with a much longer delay before taking up the mantle, historical records show.

This year’s 59th inauguration ceremony will be only the 22nd ceremony held in January. Prior to the 20th Amendment to the U.S. Constitution, adopted in 1933, every new president was expected to take office on March 4. There were exceptions however, such as if a vice president took the oath after the death of a sitting president.

The Continental Congress (the country’s governing body prior to the first elections)  set the first Wednesday in March to be the date of the first presidential inauguration, in 1789, which happened to be March 4, according to Jim Bendat, author of “Democracy’s Big Day: The Inauguration of Our President, 1789-2013” (iUniverse, 2011). But this was a logistical decision based on the the need for both Congress members and presidential transition teams to relocate to the capital.

“Back in the early days of the country, it took a long time to travel, particularly from the West Coast to Washington, D.C.,” Bendat told Live Science. “So, they needed a long period of time between the election and swearing in of the president to get everything in order.”

In fact, that first inauguration, in 1789, did not take place until April 30. Bendat said Congress couldn’t get enough of its members to show up for the inauguration of George Washington, so the ceremony was pushed back to the end of April.

Following Washington’s inauguration, Congress decided to keep March 4 as the date for all future ceremonies. In research for his book, Bendat said, he found that part of the explanation for this choice of date (beyond the time needed for the transition between presidencies) was that Congress’ study of future calendars revealed that this date was least likely to land on a Sunday. This was important because the most religious of politicians wanted to avoid official business on Sundays whenever possible, Bendat said.

Today, if the inauguration date falls on a Sunday, there is a private swearing in on Sunday and a public ceremony on Monday — as was the case for Barack Obama’s second inauguration.

By the 20th century, advances in technology and transportation meant people could travel around the country more quickly, and there was no reason for the “lame-duck” period between Election Day and the inauguration to be so long. Also, in times of national turbulence, the lame-duck period proved to be too long a wait.

This long delay was particularly difficult during the middle of the Great Depression, said the University of Missouri-Kansas City School of Law’s “Exploring Constitutional Law.” During President Herbert Hoover’s lame-duck period in 1932, Hoover and then-President-elect Franklin Roosevelt barely communicated, leaving the country waiting on the government to take action to curb economic devastation. In response, Congress proposed the 20th Amendment.

“There was a debate on when to change it, because it was decided pretty universally that four months was too long to wait,” Bendat said. “The Senate originally wanted to change it to Jan. 15, and the House of Representatives suggested Jan. 24, and Jan. 20 was reached as a compromise.”

Therefore, the 20th Amendment dictated that the president’s term would begin at noon on Jan. 20.

Tune in tonight (Sept. 17) at 6:00 p.m. ET to catch a science awards ceremony like no other. The 30th First Annual Ig Nobel Prizes…

How many revolutions did France have? It seems like that question should have a quick and easy answer, and it does: three. But, as with all things historical, there’s also a lengthy and complex answer: It depends.

As the 2020 presidential election approaches, and the coronavirus continues to circulate throughout the United States, President Donald Trump has begun to decry mail-in voting, calling it a “scam” and predicting on Twitter that the election would be a “fraudulent mess.”

When all the votes are cast and counted in this year’s momentous November 3 election, the results will have deep and potentially long-lasting impacts on numerous areas of society, including science. President Donald Trump and his challenger, former vice president Joe Biden, have presented vastly different visions for handling crucial issues—ranging from the deadly coronavirus pandemic to the damaging impacts of climate change and immigration policies.