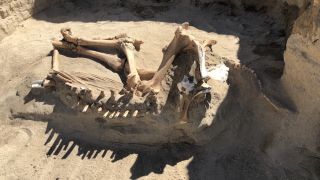 The skeletal remains of a “wild” female horse found buried in a big ancient lake in Utah and thought to date back 16,000 years to the last ice age are actually no older than 340 years old, a new study finds.

The bones, unearthed by landscapers in a Lehi, Utah backyard in 2018, were initially dated to a period that ended roughly 11,700 years ago. But after analyzing the horse’s remains, scientists realized that the hoofed beast was actually a domestic horse that lived much more recently.

The initial age of the horse remains suggested this mare was wild; such horses lived in North America from about 50 million to 10,000 years ago, disappearing around the same time that other large animals, including mammoths, short-faced bears, dire wolves and giant sloths went extinct at the end of the last ice age. (It’s likely that a combination of climate change and human interaction led to their demise, research shows.) However, the new findings suggest this horse — which died when it was about 12 years old — was domestic, dating to post-Columbian times, after the Spanish introduced the domestic horse (Equus caballus) to the Americas starting in the 16th century.

Many Indigenous people who lived in the Americas “swiftly integrated” these European horses into their cultures and economies, the researchers wrote in the study. This mare, known as the Lehi horse, was no exception; it was likely raised, looked after and ridden by Indigenous people who lived in what is now Utah, possibly by a member of the Ute or Shoshone communities, study lead author William Taylor, an assistant professor of anthropology at the University of Colorado Boulder, told Live Science.

“The Lehi horse shows us that there is an incredible archaeological record out there of the early relationship between Indigenous people and horses — a record that tells us things not written in any European histories,” said Taylor, who is also a curator of archaeology at the University of Colorado Museum of Natural History, and just created a digital museum exhibit about horses in the ancient American West.

The mix-up happened because Indigenous people buried the horse in a pit surrounded by lake sediments dating to 14,000 to 16,000 years ago.

However, new radiocarbon dating of the actual bones and clues from the Lehi horse’s anatomy and DNA now indicate that the mare lived more recently. But because the radiocarbon sample didn’t give an exact result, “we can only say that this horse died sometime after 1680,” likely before the European settlers permanently moved into the Salt Lake region during the mid-19th century, Taylor said.

Despite the mare’s injuries, people cared for the horse, possibly because they wanted to breed her with local stallions, the researchers said in the study, which was published online Feb. 4 in the journal American Antiquity.

In addition, an analysis of the isotopes (a variation of an element) in the horse’s tooth enamel revealed that it drank water and ate vegetation in the Wasatch Front region of Utah, suggesting “that the horse was raised and tended locally … near where it was found,” the researchers wrote in the study.

The United States Space Force has a new recruit in their mission to keep planet Earth safe. His name is Ghost, and he likes to…

The oldest DNA ever decoded belonged to a mammoth from a mysterious, previously unknown lineage that lived about 1.2 million years ago, a new study finds.

A horse tranquilizer is increasingly popping up as a street drug in the U.S., and it is now involved in nearly one-third of fatal opioid drug overdoses in Philadelphia, according to a new study.

A tiny statue of a Celtic deity dating to the Iron Age wears a haircut that was widespread — and widely mocked — decades ago, but is now enjoying an unexpected comeback: the mullet.