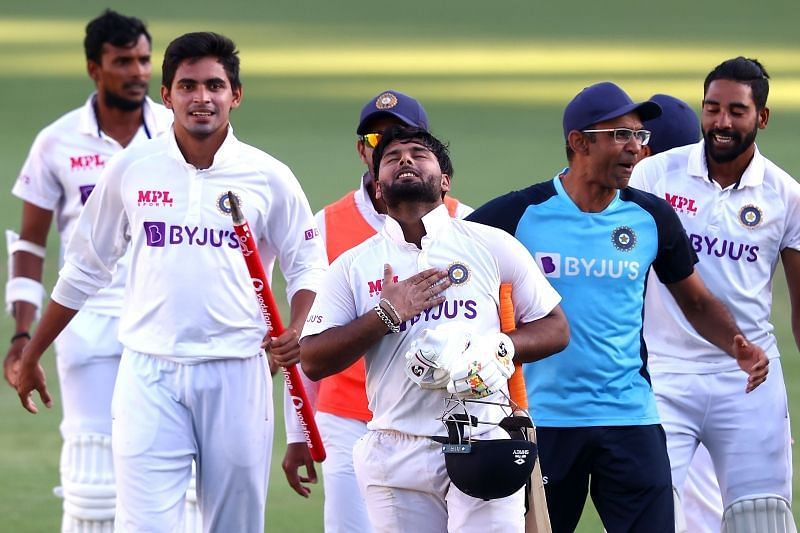 Rishabh Pant, who played a sterling role in India’s historic Test series win Down Under, said that although it feels nice to be compared to a legend like MS Dhoni, he is keen on making his own name in Indian cricket.

The 23-year-old wicket-keeper batsman, who followed up his 97 in Sydney with an unbeaten 89 in the record-chase at Gabba, added that comparisons between a legend and a youngster should be avoided.

Speaking to reporters after arriving in India from the Australian tour, Rishabh Pant was quoted as saying in an ANI report:

“It feels good when you are compared to someone like MS Dhoni but I do not want people to make comparisons. I want to make my own name in the Indian cricket team. That is the only thing I am focused on. Also, it is not good that you compare a legend with a youngster.”

Asked for his reaction on India clinching the Border-Gavaskar Trophy, battling all odds and injuries, and in the absence of most of their big names, Rishabh Pant replied:

“I am so happy that we retained the trophy. The whole team is very happy.”

Haha thank you @virendersehwag Paaji for your support. It’s an honour to represent India 🇮🇳 🙏 https://t.co/3vJELR4lOO

Haha thank you @virendersehwag Paaji for your support. It’s an honour to represent India 🇮🇳 🙏 https://t.co/3vJELR4lOO

The Indian cricket fraternity was split following the think-tank’s decision to bring in Rishabh Pant at the expense of Wriddhiman Saha for the MCG Test.

After all, the youngster’s wicket-keeping skills are no match to Saha’s. Further, his batting in international cricket, until then, had flattered to deceive.

The move to take a punt on Pant, however, paid off handsomely as the aggressive left-hander ended the Border-Gavaskar Trophy as India’s leading run-getter, with 274 runs at an average of 68.5 and a strike rate of 69.8.

He crossed the fifty mark twice, and both times carried on to make striking contributions.

Rishabh Pant’s rousing 97 in Sydney made India believe they could do the unthinkable. At the Gabba, Pant took it upon himself to prove the theory, with a match-winning 89 not out, which sealed a famous win for India.

The visitors chased down a record 328 to hand Australia their first Test defeat at the venue since 1988.

The triumph at the Gabba was also India’s first-ever Test win in Brisbane.

Former Australian skipper Michael Clarke fell short of adjectives to describe Rishabh Pant‘s match-winning knock against the hosts at the Gabba. The left-hander showed incredible maturity and scored an unbeaten 89 to chase down the target of 328 on the final day, helping his team win the Border-Gavaskar Trophy.