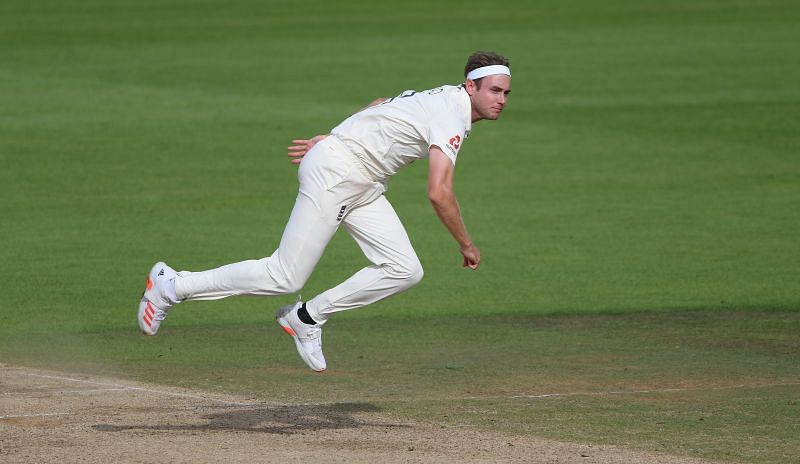 VVS Laxman has expressed surprise at Stuart Broad not being a part of England’s playing XI in the ongoing first Test against India in Chennai.

The Joe Root-led side opted for James Anderson and Jofra Archer as their two specialist pacers, with all-rounder Ben Stokes the third seamer. The visitors picked Dom Bess and Jack Leach as the spinners.

While speaking on Star Sports, VVS Laxman opined that the visitors should not have omitted Stuart Broad from their bowling attack.

“I am surprised Stuart Broad is not playing this match. It is the first Test match, and you want your best bowling attack to play against a strong Indian side. I feel they are going to rotate between Stuart Broad and Jimmy Anderson,” said Laxman.

Laxman said that Stuart Broad’s ability to bowl cutters would have come handy for England.

“Stuart Broad bowls excellent cutters, and it is necessary to bowl cutters on such pitches. He bowls a wicket-to-wicket line, and he has a lot of experience. The batsmen face a lot of difficulties when tall bowlers bowl cutters, and he would have had amazing synergy with Jimmy Anderson. Anderson, Broad and Archer can maintain the pressure on the best of batsmen,” added Laxman.

This happened 10 years ago 😮pic.twitter.com/3eK6fIiKTS

This happened 10 years ago 😮pic.twitter.com/3eK6fIiKTS

Ashish Nehra also concurred with Laxman, saying that a four-pronged pace attack would have allowed England to use their fast bowlers in short bursts. In this regard, Stuart Broad could have been the workhorse of their attack.

“Stuart Broad should have definitely played here because you could have got him, Jimmy Anderson, Jofra Archer and Ben Stokes to bowl short spells. You would have had four pacers and two spinners. So, your bowling would have looked a lot better. And Stuart Broad is a bowler who can bowl the long spells. He did well in Sri Lanka as well ,and Jimmy Anderson also took six wickets. So England have probably missed a trick here,” said Nehra.

The former left-arm pacer also opined that England should have played Moeen Ali instead of Dom Bess. The spin-bowling all-rounder would have lent more depth to the visitors’ batting while allowing them to play three specialist seamers.

“I would say England could have also played Moeen Ali. He could not play in Sri Lanka due to Covid, but he would have given the team a lot of balance being an all-rounder. Bess took wickets in the conditions that were available in Sri Lanka. but I would have played these two players, Moeen Ali ahead of Bess and Stuart Broad ahead of a batsman. You will only win the Test match when you take 20 wickets, even if you score 700-800 runs,” concluded Nehra.

Stuart Broad has accounted for 70 wickets at an impressive average of 25.67 in 20 Tests against India. However, only ten of these wickets (in six matches at an average of 53.9) have come on Indian shores.

Will James Anderson & Stuart Broad step up for England in India? 🏏

Their previous track record in the country isn’t too promising 🧐#INDvENG pic.twitter.com/02b2JkLUeN

Will James Anderson & Stuart Broad step up for England in India? 🏏

Their previous track record in the country isn’t too promising 🧐#INDvENG pic.twitter.com/02b2JkLUeN

Going by their recent trend of alternating between James Anderson and Stuart Broad in Test matches in Asia, the visitors were likely to continue that trend at the Chepauk in Chennai too.

England have made a good start to the series, reaching 263-3 by stumps on Day 1. Captain Joe Root, playing his 100th Test, has led from the front with a fine unbeaten hundred and looks good for more.

With international cricket set to resume in little over a week, England speedster Stuart Broad has taken the help of a sports psychologist to prepare him for the return. The first Test match between England and West Indies will be played at Hampshire Ageas Bowl behind closed doors in a bio-secure venue on July 8.

England pacer Stuart Broad believes that he could be the last man to join the 500 wickets club as he feels that it requires a lot of commitment from an individual to play a lot of Test matches in order to reach the landmark.

Sri Lankan batsman Angelo Mathews  found England pacer Stuart Broad to be quite a handful during the first Test between England and Sri Lanka at Galle.