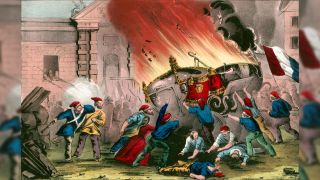 How many revolutions did France have? It seems like that question should have a quick and easy answer, and it does: three. But, as with all things historical, there’s also a lengthy and complex answer: It depends.

“If revolution is a regime change involving collective physical force, then the key dates are 1789, 1830 and 1848,” said Peter Jones, a professor of French history at the University of Birmingham in the United Kingdom. The first revolt is the one we all know as the French Revolution, which ended with Louis XVI and Marie Antoinette losing their heads. The second is usually called the July Revolution, which saw the House of Bourbon dethroned in favor of the House of Orléans. And the third is sometimes called the February Revolution or the French Revolution of 1848, which ended the Orléanists and brought in a period known as the Second Republic.

The longer answer largely hinges on your interpretation of what a revolution is; for example, some academics prefer a more intricate definition.

“You need a popular movement, a split in the ruling class where one portion crosses over to the revolution and offers their leadership — otherwise, it’s just a riot — and you also need a crisis in the state,” said Robert Gildea, a professor of modern history at the University of Oxford in the United Kingdom. “If all of those elements are fulfilled and it leads to a regime change, then we can talk about revolution.”

Gildea agrees with Jones’ reckoning that there have been three definitive French revolutions. Those are cast-iron, he said. However, there are quite a few other notable rebellions in French history that are worthy of discussion and could be interpreted as revolutions.

The last of the three revolutions, the 1848 February Revolution, booted out the hitherto restored monarchy and initiated a period known as the Second Republic, but it wasn’t long before political instability returned to France yet again. The republic’s own elected president, Louis-Napoléon Bonaparte, also called Napoleon III (a nephew of the Napoleon), dissolved the National Assembly, the country’s parliament, without any legal basis.

This coup d’état made him the sole ruler of France, and a new constitution gave him the right to be president for decade-long terms with no limits on his re-election. He didn’t stop there; in 1851, he put a referendum to the French people, asking them to back him as emperor and — wouldn’t you know it — an unlikely 97% of the votes were in favor. In 1852, the Second Republic was formally rebranded as the Second Empire, with Bonaparte on the throne. While all this upheaval totally changed the balance of power in France and it wasn’t based on free and fair elections, historians don’t call it a revolution, because there was no grassroots violence that triggered it. However, the later demise of Bonaparte’s Second Empire did coincide with a revolution of sorts.

In 1871, it was clear that France was about to lose a war with Prussia. Bonaparte was captured, and in the midst of the political confusion, republican forces back in Paris seized control and declared the Third Republic. But while Emperor Bonaparte was basically gone and the republicans were in charge, this didn’t signal a significant change in the policies or tone of the government.

“Strictly speaking, we wouldn’t say this was a revolution, either, because it was just a seizure of power,” Gildea told Live Science. “Essentially, they ended up founding quite a conservative republic.”

However, the backlash against this “same old, same old” conservative republic did have some of the trappings of a revolution, such as barricaded streets and communist leaders. This revolt is known as the Paris Commune, and leftists managed to be in control of the capital city for months before the Third Republic quashed the rebellion and reaffirmed its authority during what is ominously known as the Bloody Week. The Paris Commune was effectively a revolution, said Gildea; it’s just that it failed.

“The defeat of the Paris Commune in 1871 is a founding moment for French socialism,” he said. “The Third Republic then stays in place until it’s defeated by Germany in 1940.” During the bulk of World War II, it was replaced by the Vichy government, which collaborated with the Nazis. That was eventually replaced by the Fourth Republic when France was liberated, which was basically a reinstalled version of the previously defeated conservative Third Republic. The constitution was later rewritten in 1958 to create the Fifth Republic, which reintroduced the position of president and survives to this day. But even that’s not the end of the story; in its short history, the Fifth Republic has faced serious threats to its existence.

Ever since 1848, Algeria had been administered as an integral part of France. From the French government’s point of view, the North African territory was not a colony but rather officially as much a part of France as Paris. Most Algerians would probably disagree with that status and say their country was subjugated by the French. However, it is possible to argue on a technicality that the Algerian War of Independence in the mid-20th century was actually a French revolution, Gildea said. In reality, however, most people wouldn’t include it in their tally of French revolutions.

So, how many revolutions have the French had? The short answer is three, but the long answer is three proper revolutions and a number of near-revolutions. Long story short: For much of the 1800s and early 1900s, France was not exactly a politically stable place.