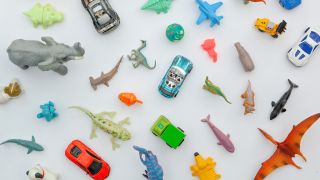 “Only we humans make waste that nature can’t digest.” Those are the words of oceanographer Capt. Charles Moore, who discovered the Great Pacific Garbage Patch in 1997. And, of course, he’s talking about plastic.

Most people reading this will probably have something made of plastic within their line of sight. This material is ubiquitous: we’re now producing more than 300 million tons (272 metric tons) of plastic a year, and roughly half of that is intended for single-use — meaning that it’s discarded immediately after it has served its purpose. This has led to a mounting problem of plastic waste going to landfills, and some of this waste gets blown off course and makes its way into rivers and ultimately the sea. In fact, around 8 million tons (7.2 million metric tons) of plastic pollution enters the ocean every year, where it entangles marine life, pollutes coral reefs and ultimately — subjected to degradation by water, wind and sun — breaks apart into trillions of tiny microplastic pieces.

These particles of plastic look a lot like food to many marine species, who then gorge on the pollution, and end up starving from lack of real nutrition. The surface of microplastics also attract pollutants in the ocean, and end up transporting these into the bodies of animals, with effects we’re still trying to understand. There’s a possibility that microplastics could be harming humans as well, because we consume them via seafood and even in drinking water: in 2019, the World Health Organization called for more research into the potential impacts of microplastic pollution on our health.

Underpinning all this is the fact that, depending on the ingredients used to make it, plastic can be incredibly resilient and might never truly biodegrade (which for the purposes of this article, means being efficiently reduced to basic reusable compounds in nature, by the microorganisms in water and soil). Pair that with the volume of plastic pollution in our environment, and we have a clear problem. Most single-use plastics entering the ocean, for instance, will stay there for centuries.

How did we create this crisis of persistent plastic? The answer lies in the process we use to make plastic itself. But first, it’s important to understand that “plastic” isn’t just the shopping bags we picture floating in the ocean.

“The term ‘plastic’ often covers a wide range of heterogeneous materials, each with differing applications that require very different physical properties,” said Carl Redshaw, a chemist at the University of Hull in the United Kingdom and a participant in the university’s Plastics Collaboratory project, which conducts research to improve the sustainability of the plastics industry. “In fact, more than 300 types of plastics are known,” Redshaw told Live Science.

So, if plastics are so different, what do they have in common? They’re made of polymers, which are molecules comprising many repeating units, in formations that give plastics many of the desired qualities — such as flexibility, malleability and strength — that they often share. Beyond that, plastics generally fall into one of two broad categories: bio-based plastics, in which polymers are derived from sources such as cornstarch, vegetable fats and bacteria; and so-called ‘synthetic’ plastics, in which polymers are synthesized from crude oil and natural gas.

To understand why, we’re going to look at an example of oil-derived plastic: take the milk bottle chilling in your fridge. This carton begins its life somewhere far more dramatic — deep in the bowels of the Earth, as crude oil. This substance, pooling in high-pressure chambers within the Earth’s crust, is drilled and pumped to the surface and carried through pipelines to oil refineries. Its dense sludge is made up of hydrocarbons, compounds made from combinations of carbon and hydrogen atoms that form chains of varying lengths, giving them different properties. These hydrocarbons are the earliest raw materials of plastic, ready-made by the Earth.

At the refinery, plastic production is truly set in motion. Here, molasses-like crude oil is heated over a furnace that separates the hydrocarbons into different groups— based on the number of atoms they contain and their resulting molecular weight — and then feeds them into a nearby distillation tube. Inside this tube, the longer, typically heavier hydrocarbons sink to the bottom, while the shorter, lighter ones rise to the top. The result is that crude oil gets separated into several distinct groups of chemicals for use — such as petroleum, gasoline and paraffin  — each of which contains hydrocarbons of a similar weight and length. One of these groups is naphtha, a chemical that will become the primary feedstock for making plastic.

Naphtha is like gold dust for plastic production, because two of the many hydrocarbons it contains are ethane and propene. These two compounds are crucial to the formation of the most commonly produced and ubiquitous plastic products on Earth, including the type used for that milk carton. But to be made into something that can actually be used to build plastic, ethane and propene have to be broken down from their raw hydrocarbon state into smaller units.

There are different ways to do this. One method is to apply high heat and high pressure in a zero-oxygen environment. This process, called “steam cracking,” breaks down the hydrocarbons into shorter molecules called monomers.

“Monomers such as ethylene from ethane, or propylene from propene, can be derived straight from naphtha after thermal cracking,” (which incorporates steam cracking), said Payal Baheti, a postdoctoral researcher at Aston University focusing on sustainable polymer materials. The simplified ethylene and propylene, finally, are the precious ingredients needed to make plastic’s backbone.

This next step unfolds through a process called polymerization, wherein those individual monomer ingredients are combined chemically in new arrangements to produce the long repeating chains known as polymers. In this case, ethylene and propylene form polyethylene and polypropylene — the two most common and widely produced polymers on Earth.

So, why are these two polymers so popular? Polyethylene’s makeup allows it to be used to make plastics of different densities — meaning it can be flimsy and pliable, or sturdy and tough — thus making its applications extremely diverse. Meanwhile, polypropylene’s configuration makes it particularly flexible and resilient. Consequently, we see these types of plastic every day, predominantly in single-use items such as the milk carton, not to mention plastic wrappers, straws, water bottles, shopping bags, shampoo containers, bottle caps — the list goes on.

Yet, these are just two varieties of synthetic plastics out of many dozens more. Other types of hydrocarbons are isolated and broken down from different sources — not only from crude oil but also from natural gas — and are used to make plastic, too. In some cases, polymers might be made of a single monomer, repeated, as we see in polyethylene and polypropylene, or they might involve combinations of a few types of monomers.

What’s more, each of those polymer chains will then be processed in a variety of ways and mixed with various additives — antioxidants, foaming agents, plasticizers, flame retardants — that equip them to fulfill the variety of niche functions that make plastics so versatile.

“Different plastics need to have different properties,” Baheti told Live Science. “Take the example of food packaging, which should deter the passage of excess oxygen or sunlight, to avoid degradation, so it contains additives to make it so. “One could say it’s the additives that give a polymer its properties and leads to the formation of a plastic.”

These final flourishes create the huge diversity of plastic products we have today — and that make enormous contributions to food production and storage, cosmetics, technology, medicine and health care.

Now, let’s fast-forward through that production process once more. Plastic that’s synthesized from oil and natural gas is made by isolating hydrocarbons, breaking them down into their component parts and then reconstituting these parts into entirely new formations never before seen in nature. Simply speaking, this creates an “alien” material unfamiliar to microbes in Earth’s water and soil, Baheti explained. “The carbon backbone found in synthesized plastic is not recognized by soil’s bacteria, meaning they cannot digest and convert it into water and carbon dioxide.”

“The likes of polyethylene can take centuries to decompose in landfill sites,” Redshaw said. “This means much of what has been produced during our lifetime still remains in its near original form. And persistence isn’t the only issue: as it gradually breaks apart under the influence of sunshine, water and  wind, oil- and natural gas-derived plastic releases greenhouse gas emissions contained within, as well as leaching the chemicals added during production back into the environment. The sheer volume of single-use plastic pollution, especially — combined with its persistence and an ongoing environmental impact that can last for centuries — has created the environmental catastrophe we see today.

But there may be a way out of this mounting pile of trash. Redshaw believes biodegradable plastics — which are a focus of his research — could be one potential solution. To rehash, making biodegradable plastic doesn’t necessarily mean producing it from bio-based sources like corn starch (although that could provide a solution). More specifically, it entails making plastic from polymers that can be broken down reasonably efficiently by microbes in water and soil.

For this to have real planetary impact, biodegradable polymers would need to replace the likes of oil-based polyethylene and polypropylene — but while also maintaining properties like strength and flexibility that make these conventional polymers so desirable. That’s a tall order, made trickier by the fact that conventional polymers remain competitively cheaper to make.

But a few biodegradable options are starting to make headway. One is a type called polylactides, which are being used to make single-use items such as cups, cutlery and straws, that could biodegrade more effectively once they’re in the environment. These kinds of inventions are likely to increase as global pressure grows to make plastic more sustainable, Redshaw reckoned.

There are hints of optimism elsewhere, too. In 2016, researchers discovered plastic-eating bacteria, and others have since identified polyethylene-munching worms (this beastie is a caterpillar of the greater wax moth, Live Science previously reported). They’ve also found enzymes that can be engineered to break down plastic waste.

“Maybe, in the years ahead, we will learn from the bacteria and worms that possess the ability to break down and digest plastics, even stuff like polyethylene carrier bags, and design large, artificial worms that can eat their way through our plastic waste — like the giant maggots that featured in ‘Doctor Who’ back in the ’70s!” Redshaw said.

In any case, in the process of creating plastic, humans have managed to take raw materials from nature and transform them so thoroughly that nature no longer recognizes them. Our ingenuity is what got us in this mess; now, hopefully, it can get us out.

On Dec. 30, 1903, a spark from a stage light set Chicago’s Iroquois Theatre ablaze. “The stage and the curtain and the rest caught fire,” said Bill Carroll, grandson of the theatre’s co-owner and adjunct professor of chemistry at Indiana University Bloomington. “There were insufficient exits, and it was terrible.” Over 600 people died in the disaster — the deadliest single-building fire in U.S. history.

Sea cucumbers — those chubby tubes of flesh that scooch around the ocean floor — have a very special talent: The tubular creatures are elite poopers, collectively expelling more than 70,000 tons (64,000 metric tons) of sandy poop out of their bottoms each year.

When scientists drilled a half-mile-long (900 meters) hole into an Antarctic ice shelf, they found something surprising: a rock covered with unknown animals on the…