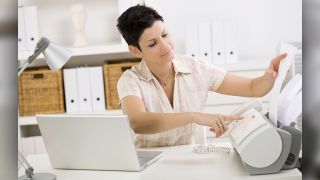 Remember, most fax machines require that the printed side face toward the fax machine.
(Image credit: Shutterstock)

Like a cross between a telephone and a printer, fax machines copy documents in one location and print them out in another — even thousands of miles apart. Before the ubiquity of computers and high-speed internet and when the other options were snail mail or a courier, a fax could relatively quickly transmit medical records to doctors, photos to newspapers and invoices to clients. But how do fax machines work?

“Basically, a fax machine scans an image or a document line by line, then transmits that scan to a receiver where it’s printed out and reproduced,” said Jonathan Coopersmith, author of “Faxed: The Rise and Fall of the Fax Machine” (Johns Hopkins University Press, 2015) and professor of history at Texas A&M University. Faxes operate on telephone lines today, but early faxes (short for facsimile machines) used telegraph lines, which transmitted text messages using codes of long and short pulses, such as Morse code. In fact, the fax was invented in 1843, three decades before the telephone. Faxes have kept the same fundamental design and function since that time, but the mechanics have changed, Coopersmith said.

In the 19th century, a fax machine’s stylus moved over a document that was held in place. Each document had a message that was written in ink coated with a treated dry resin known as shellac powder. “As your stylus goes, most of the line will be blank, but then it hits shellac, which raises the stylus and sends a beep to say there’s something here, there’s black here,” Coopersmith told Live Science. Today, faxes optically scan documents without physically touching them. These machines shine a light, which reflects off of the black (or printed) areas of the surface but not the white (or blank) areas.

But how do faxes talk to each other? Before sending a document, the two faxes in different locations have a quick conversation, called a handshake, to confirm there’s really a fax machine on the other end, explained Abe Lopes, owner of Ace Copy Inc., an office equipment repair shop based in Newark, New Jersey. “That’s why you hear the little ‘deh-leh-lehhh’ sound, the little dial tones,” he told Live Science.

Fax machines split a page up into a grid of many tiny squares, similar to pixels. In real time, the sending fax reads one line of squares at a time and uses beeps to tell the receiving fax whether the squares are black or white (represented by ones and zeroes, respectively), Lopes said. “As the paper is fed through the sending fax, the receiving fax is working simultaneously,” he said. “One fax is sending ones and zeroes, on and off signals, while the other receives it, and translates it back to black and white to print out.”

The key to a functioning fax is having two separate telephone lines, Lopes said. One line for the actual phone and another for the fax. “If the fax uses the same line as the phone and someone picks up the phone in the middle, that will interrupt and knock off the transmission,” he said. That means paper jams, starting over, or both.

Although fax machines may seem outdated today compared with the convenience of attaching a PDF to an email or collaborating on a Google Doc, many medical offices and small businesses still rely on faxes. And there’s home use, too. That’s how Coopersmith became fascinated with faxes. His mother in the United States enjoyed using one to communicate with friends in Russia and Thailand. “How neat,” he thought. “Here’s a technology so simple my mother can use it, yet so complicated it can communicate around the world.”

Scientists should be able to create magnetic fields on Earth that rival the strength of those seen in black holes and neutron stars, a new study suggests.

Death is not a linear process.