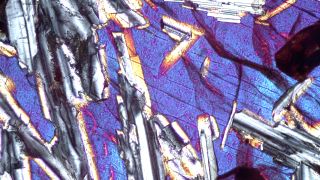 As seen under a microscope, a basalt inclusion in a ceramic tile from Gordion, an ancient site in what is now Turkey.
(Image credit: Courtesy of Penn Museum)

Highly magnified views of archaeological artifacts display their extraordinary hidden beauty and reveal intriguing clues about how they were crafted and used long ago.

For example, a 17th-century Persian textile contains fibers of silk thread that were individually wrapped with thin strips of metal. And the microstructure of a needle from Cyprus retains the touch of the person who shaped it, in traces of dark corrosion that emerged as the needle was rotated and hammered.

These and other zoomed-in archaeological images are showcased in a new exhibit called “Invisible Beauty: The Art of Archaeological Science,” which opens at the Penn Museum in Philadelphia on Jan. 16.

In another striking image, a bit of basalt glitters in a ceramic roof tile from Gordion, a site in Turkey that was inhabited from at least 2300 B.C., during the early Bronze Age (the tile dates to the first half of the sixth century B.C.). Basalt, a volcanic rock, looks dull and black to the naked eye. But when viewed in polarized light under a microscope, it shimmers with vivid colors.

Inclusions such as basalt in a roof tile can tell archaeologists if the tile was made locally or imported, and this information can help them piece together historic trade routes and exchange networks, said Marie-Claude Boileau, co-curator of the exhibit and director of the Penn Museum’s Center for the Analysis of Archaeological Materials (CAMM).

The image is stunning not only because of the color-saturated crystals but also for the story it tells, she told Live Science.

“We’re also trying to figure out the technology of those who made those tiles — how they mixed the clays and how they added any type of inclusions, including those pieces of basalt,” she said. All of the imaging in the exhibit was carried out at CAMM, most of it conducted by undergraduate and graduate students.

Since the invention of the microscope in the 16th century, scientists have used magnification and light to peer at organisms and structures too small to be seen with the naked eye. Today, high-powered modern microscopes offer a glimpse of worlds that researchers centuries ago could only dream of seeing, such as a water flea giving birth, vessels surrounding the brain of a juvenile zebrafish and even footage of individual living cells in 3D.

“People are really used to seeing archaeologists in the field doing the excavations;  we really wanted to show the scale of analysis that we can do,” Boileau said. “Even from the smallest piece of an artifact or specimen, we get a lot of information about the past.”

Scientists using a new technique have uncovered the colorful and once-hidden scenes in paintings of the ancient Etruscans, a group of people who flourished on the Italian peninsula around 2,500 years ago at a time before Rome became powerful.