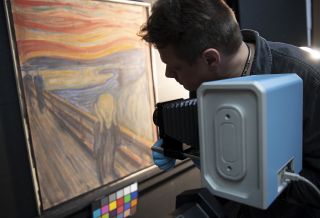 Written in tiny faint letters on the top-left corner of Edvard Munch’s painting “The Scream,” is a mysterious inscription that reads, “Could only have been painted by a madman!”

Experts have long debated the identity of the inscriber, with some suggesting a dissatisfied vandalizer is the author, while others pointed fingers at the Norwegian painter himself. Now, a new analysis finds that the mysterious phrase was almost undoubtedly inscribed in Munch’s handwriting.

The faint inscription, written in pencil, is visible to the naked eye but it isn’t very clear. “It’s been very difficult to interpret,” Thierry Ford, the paintings conservator at the National Museum of Norway said in a statement. “Through a microscope, you can see that the pencil lines are physically on top of the paint and have been applied after the painting was finished.” But it wasn’t clear when or why.

This version of “The Scream” was one of four versions painted by the artist, but the only one with such an inscription, according to The New York Times.

The inscription was first mentioned by a Danish art critic in 1904 when the painting was on exhibit in Copenhagen, about 11 years after Munch painted it. The critic thought, at the time, that a member of the public wrote the message, according to the statement.

To understand the mystery, Mai Britt Guleng, the curator at the National Museum of Norway and the team took infrared photographs of the painting. The scans made the carbon from the pencil marks much clearer.  The researchers compared the inscriptions with Munch’s handwriting in his diaries and letters, and analyzed the details of the painting’s first showing in Norway.

“The writing is without a doubt Munch’s own,” Guleng said in another statement. “The handwriting itself, as well as events that happened in 1895, when Munch showed the painting in Norway for the first time, all point in the same direction.”

The researchers hypothesize that Munch wrote this phrase after his painting was exhibited for the first time domestically at the Blomqvist gallery in Norway in 1893 (he had previously exhibited the painting several times abroad). This exhibition in Norway drew much criticism, with one art critic Henrik Grosch writing that the painting is proof people should not “consider Munch a serious man with a normal brain,” according to the statement.

At the time, the Student Society in Kristiania held a discussion event about his paintings, where some people expressed positive views about his art, but others, such as medical student Johan Scharffenberg questioned Munch’s mental state. Munch was likely there and evidently took those comments to heart, as he brought up the event in his letters and diary entries several times in the decades following, according to the statements.

Munch was also very concerned, in general, about hereditary diseases, as multiple members of his family suffered from mental illness.

“The theory is that Munch wrote this after hearing Scharffenberg’s judgment on his mental health, sometime in or after 1895. It is reasonable to assume that he did it quite soon after, either during or following the exhibition in Kristiania,” Guleng said. “The inscription can be read as an ironic comment, but at the same time as an expression of the artist’s vulnerability.”

This painting will be displayed at the new National Museum of Norway once it opens in Oslo in 2022.

Categories: News
Tagged: according to The New York Times, carbon, said in a statement, said in another statement

Scientists using a new technique have uncovered the colorful and once-hidden scenes in paintings of the ancient Etruscans, a group of people who flourished on the Italian peninsula around 2,500 years ago at a time before Rome became powerful.

An important copy of  Leonardo da Vinci’s famous “Salvator Mundi”  painting is back in the hands of an Italian museum after being stolen at some point in the last year. No one knew it was missing.

A nearly-life-size depiction of a kangaroo — realistic genitalia included — is the oldest known rock painting in Australia. Scientists recently pinpointed its age to 17,300 years ago with a technique that had never been used on Australian ancient art before: measuring radioactive carbon in wasp nests from rocks near the artwork.

Nearly five millennia ago, an artist inked an incredibly detailed painting of geese in the tomb of an Egyptian vizier and his wife. This “Mona Lisa” of ancient Egypt may depict a previously unknown and now extinct species of goose, a new analysis suggests.

For over a century, thousands of poisonous millipedes have swarmed train tracks in the thick, forested mountains of Japan, forcing trains to grind to a halt. These “train millipedes,” so-called for their famous obstructions, would appear every so often — and then disappear again for years at a time. Now, scientists have figured out why.