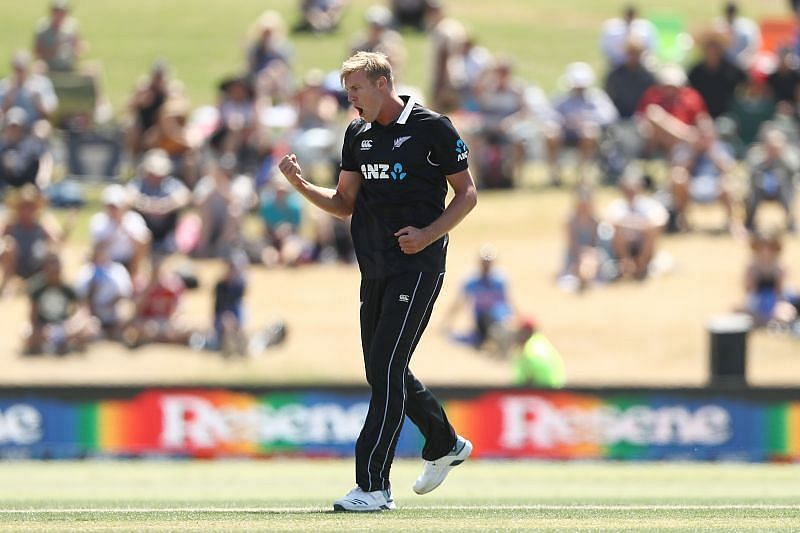 There is plenty of excitement around New Zealand all-rounder Kyle Jamieson as the IPL 2021 auction is all set to be held in Chennai on Thursday.

Kyle Jamieson has put up his name in the auction for a base price of Rs 75 lakh. The 6’8″ tall New Zealander made his T20I debut against West Indies in November 2020. But it is in Test cricket that he has made a massive impact.

A day ahead of the IPL auction, Kyle Jamieson played down the hype around his name. He was quoted as saying in an ESPNCricinfo report:

“To be fair, I haven’t paid too much attention to it and for me I’ve been focused on what I can control here and I think things will pan out the way they are going to tomorrow night – whether that means I get picked up and go great and if not there’s still a lot of cricket to be played across the winter. I try not to pay too much attention. Things like that tend to take care of themselves.”

What a find he has been for New Zealand 🤩🇳🇿#NZvPAK pic.twitter.com/AhJvLWKOyk

What a find he has been for New Zealand 🤩🇳🇿#NZvPAK pic.twitter.com/AhJvLWKOyk

Kyle Jamieson is yet to get a taste of Indian conditions. The New Zealand all-rounder admitted that he would be keen to add to his skills if he gets a chance to play in the IPL. He added:

“That experience, if it comes, I’m not sure what’s going to happen, but it’s certainly a different experience and a lot of new learnings to come from. The probably most exciting thing is that when you get to play in these different environments, there’s a lot of learning and ways to upskill and try to add strings to your bow.”

According to former Indian batsman Gautam Gambhir, Kyle Jamieson has the potential to become the next Andre Russell. Speaking on Star Sports, Gambhir claimed:

“Kyle Jamieson is not a big name at the moment, but he will turn out to be a superstar. This is probably the right auction for all franchises to get a hold of him. And because he is someone whom you can keep for a longer period of time. He is seven feet, he is that tall. He can bowl 140 and can hit the ball long. He probably could be the next Andre Russell in the making.”

Kyle Jamieson is currently preparing with the New Zealand squad for the five-match T20I series against Australia at home, which begins on February 22.

Gautam Gambhir feels Kyle Jamieson could be the “next Andre Russell in the making.” Russell flattered to deceive for the Kolkata Knight Riders last season, but he has been one of the IPL’s best performers in recent years.

New Zealand pacer Kyle Jamieson said that he will never forget the home series against India for the rest of his life. Kyle Jamieson was drafted into the Test side in place of Neil Wagner who was awaiting the birth of his child.

Former New Zealand speedster Shane Bond believes that if Kyle Jamieson performs well in the T20Is against West Indies, he can get his maiden IPL call-up. Jamieson impressed cricket fans last summer when his all-round abilities in the Tests and ODIs against India helped New Zealand win both the series comfortably.

The International Cricket Council (ICC) has fined New Zealand pacer Kyle Jamieson 25 percent of his match fee for throwing the ball towards Pakistan’s Faheem Ashraf in an ‘inappropriate and/or dangerous manner’.