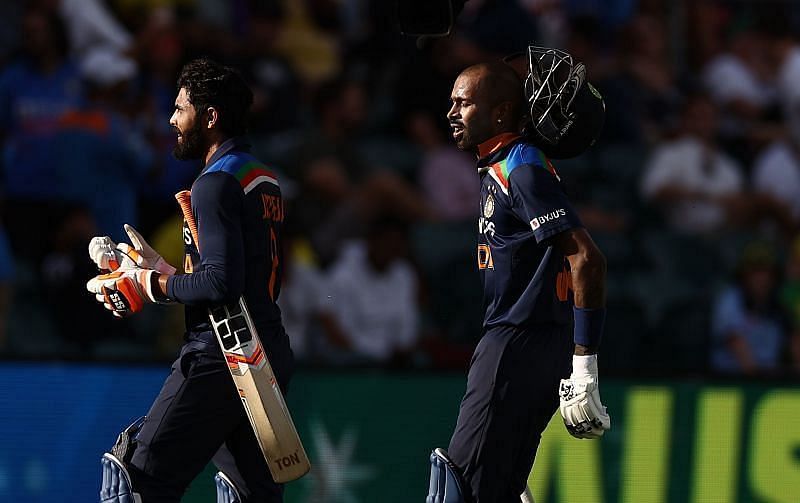 Hardik Pandya and Ravindra Jadeja have been among the most consistent performers for India in the last few years. However, the duo have rarely played together since the 2017 Champions Trophy.

India started with the Kuldeep Yadav – Yuzvendra Chahal combination for a long time, with Hardik Pandya being the team’s all-rounder. This meant that Jadeja only got opportunities to play when Pandya wasn’t available. When the two finally played together in India’s ODI series against Australia, they proved to be quite a lethal combination.

In the third ODI at Canberra, India was reeling at 152-5 when Hardik Pandya and Jadeja formed a partnership at the crease.

Hardik Pandya (92 off 76) and Jadeja (66 off 50) did some innings-building first and then began attacking the Aussie bowlers. Together, the duo accumulated as many as 93 runs in the last seven overs to lift India to a challenging total of 302 runs. India eventually won the final ODI of the series by 13 runs.

BCCI president and former Indian captain Sourav Ganguly was impressed with the victory and opined that the all-rounder duo’s finishing skills could be a real boon for the team in the future.

“Good win for India in spite of the series loss… Hopefully, it will turn things around as it’s a long tour. Jadeja and Pandya can be huge assets to this team in the long run… they play in difficult positions,” Ganguly tweeted.

After MS Dhoni’s retirement, India have been in search of a mature finisher in the side. Hardik Pandya’s tally (210 runs) for India in the ODI series Down Under bodes well for the Men in Blue.

Was skeptical about Hardik the pure batsman in 50 overs cricket. Not anymore. 🙏👏👏👏#AUSvsIND

Was skeptical about Hardik the pure batsman in 50 overs cricket. Not anymore. 🙏👏👏👏#AUSvsIND

Jadeja has completed his evolution into a hard-hitting all-rounder as well. The southpaw scored 232 runs in IPL 2020 at a strike rate of 171.85. If Pandya can regain full fitness in time and bowl 4 overs for the team in next year’s T20 World Cup, the pair could have a huge impact on the team balance in the Indian squad.

Both Hardik Pandya and Jadeja will be back in action when India begin their 3-match T20I series against Aaron Finch’s Australia on Friday.

Former India batsman Sanjay Manjrekar has admitted that he is no longer sceptical about Hardik Pandya making the ODI side as a pure batsman. His remarks come on the back of two top-notch innings played by Pandya against Australia in the recently concluded ODI series.

Former Indian opener Aakash Chopra has opined that Hardik Pandya‘s batting has grown by leaps and bounds since he stopped bowling regularly.

Former Indian batsman Sanjay Manjrekar has sparked a debate in cricketing circles once again by opining that the Men in Blue should only opt for specialists in white-ball cricket. He clarified that he has nothing against Ravindra Jadeja, but added the southpaw and Hardik Pandya would not get a place in his ODI XI.