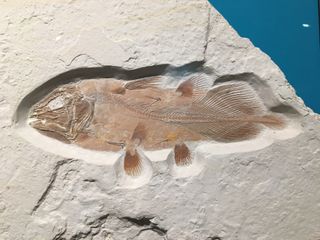 An example of what a complete fish fossil coelacanth looks like.
(Image credit: University of Portsmouth)

Researchers believe the fish was a much larger member of the coelacanths, an Order of fish nicknamed the ‘living fossils that were thought to be extinct until a live specimen was found in 1938. Given the size of the newfound lung, this particular coelacanth would have been 17 feet (5.2 meters) long, according to the researchers.

The fossilized lung was part of a large slab, uncovered in phosphate beds in Oued Zem in Morocco, which contained several other bones belonging to pterosaurs. The bones confirm that the coelacanth dates back to the end of the Cretaceous period 66 million years ago, just before the dinosaurs became extinct.

“It is absolutely enormous; it’s a giant coelacanth, in a place we have never found them before” said study co-author David Martill, a paleontologist at the University of Portsmouth in England.

The new discovery sheds light on one of the most mysterious fish groups to ever swim in the oceans, but it also raises questions about what happened to them.

A private pterosaur collector in London bought the fossil slab from a seller in Morocco and originally mistook the fossilized fish lung as part of a pterodactyl skull. But on closer inspection, he was unsure, so he contacted Martill to get his professional opinion.

However, after visiting the fossil slab in person, Martill knew exactly what he was looking at. “I realized that instead of being one bone, it was actually hundreds of very thin sheets of bone,” Martill said.

The fossil lung was somewhat barrel-shaped, but instead of the staves — the wooden planks that make up a barrel — lined up along the barrel, they were wrapped around it and overlapping.

“There’s only one species that has a bone structure like that, and that’s the coelacanth fish,” Martill said. “They actually wrap their lung in this bony sheath, it’s a very unusual structure.”

Initially disappointed, the collector allowed Martill to separate the lung from the rest of the slab so it could be properly analyzed.

After discovering the fossilized lung, Martill teamed up with Brazlillian paleontologist Paulo Brito, a world leading expert in coelacanth lungs, from the State University of Rio de Janeiro. Brito confirmed Martill’s suspicions and was “astonished” at the size of the specimen, according to a statement from the University of Portsmouth.

Previously discovered ancient coelacanths lived in rivers and had bodies extending between 10 and 13 feet (3 and 4 meters) in length; but the new unnamed species, which is thought to have lived in the open ocean, would have been much bigger. Modern-day coelacanths are smaller than both and reach around 6 feet (1.8 m) long.

“The coelacanth body plan has been pretty constant for the last few hundred million years,” Martill said. “This one is just much bigger.”

The collector has since donated the lung to the Department of Geology at Hassan II University of Casablanca in Morocco.

One of the biggest mysteries surrounding the fossilized lung is where the rest of the coelacanth’s massive body ended up. Martill’s leading theory is that one of the large reptilian marine predators that dominated the Cretaceous oceans — such as plesiosaurs and mosasaurs — may have eaten it

“Coelacanths were slow-swimming fishes; this massive version would have been easy prey for these big predators,” Martill said.

The researchers also found damage on the lung, which also suggests the fish was bitten by one of these massive predators.

Plesiosaurs and mosasaurs would have also regurgitated up large bones from their meals, like modern-day lizards do, which could explain why the lung ended up isolated with other bones from different animals. It would also explain why other coelacanths haven’t been found in the area, as the fish may have been eaten hundreds of miles away and then regurgitated much later.

However, there is no way to prove that it died in this way.

“We haven’t written about this in the paper, because the evidence is really tenuous,” Martill said. “It’s a good story but it’s only one possibility.”

What happened to the rest of the coelacanths is also a mystery. They completely disappear from the fossil record at the end of the Cretaceous period, which is what originally led scientists to think they were extinct. But live coelacanths found within the last century prove that at least one species managed to survive.

“We keep finding coelacanths up until the end of the Cretaceous, and then they just disappear,” Martill said. “This is one of the last coelacanths before what we call the pseudoextinction.”

It is possible that these giant coelacanths could still secretly roam the unexplored pockets of the deep sea today. But although he hopes this might be the case, Martill admitted: “the evidence of this happening isn’t good.”

The study was published online Feb. 15 in the journal Cretaceous Research.

Mary Anning was an impoverished, self-taught fossil hunter whose remarkable discoveries paved the way for modern paleontology. Through her carefully documented finds, she expanded human knowledge of ancient life, although until recently her work was overlooked or dismissed due to her gender and social status.