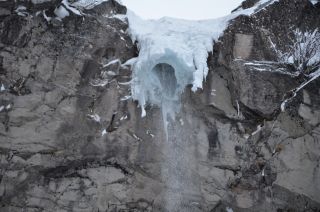 One tourist has died and three others were hospitalized with severe injuries after the collapse of an enormous frozen waterfall in eastern Russia on Thursday (Jan. 7), according to news reports.

The four tourists were among dozens of visitors to Russia’s Vilyuchinsky waterfall — a tourist attraction known in winter as the Tsar Icicle — on Thursday. The 130-foot-tall (40 meters) tower of ice collapsed suddenly, trapping the four beneath a sheet of ice for several hours.

More than 40 rescuers flew to the scene by helicopter to dig the trapped tourists free, according to a statement from the Russian Emergency Situations Ministry — but one victim was already dead upon their arrival. The others — including a teenage boy — were promptly evacuated to a hospital with severe injuries.

Vilyuchinsky waterfall sits on the Kamchatka peninsula in far eastern Russia. The peninsula is home to around 160 volcanoes, 29 of which are still active. Many are capped with glaciers. As those glaciers melt in warm weather months, their runoff trickles through the mountains, occasionally forming waterfalls like Vilyuchinsky. In winter, when that runoff freezes again, the falls become a towering, frozen monument to the changing seasons. The so-called Tsar Icicle draws hundreds of tourists each winter, according to the Siberian Times.

Right now, no one knows what caused this year’s deadly collapse. It’s possible that an avalanche from a nearby volcano could have caused an ice block to break loose, according to Russian media reports, but this theory has not been confirmed. An investigation into the accident is underway.

Russian authorities have reported the first known cases of an avian influenza virus called H5N8 passing from poultry to humans, according to news reports.

In January 1959, a group of nine young hikers — seven men and two women — trudged through Russia’s snowy Ural Mountains toward a peak locally known as “Dead Mountain.” The hikers pitched their tents at the base of a small slope, as an intensifying blizzard chilled the night air to minus 19 degrees Fahrenheit (minus 25 degrees Celsius). They never made it to their next waypoint.

Editor’s note: This article was last updated at 9:00am on Feb. 2. The original article was posted on Jan. 11.