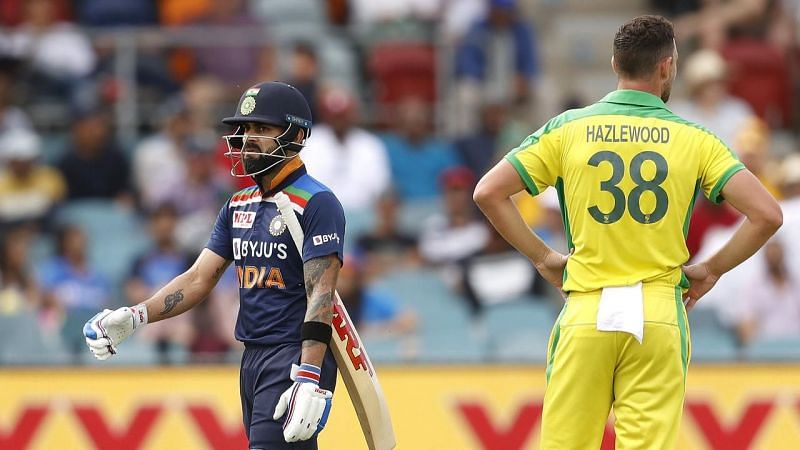 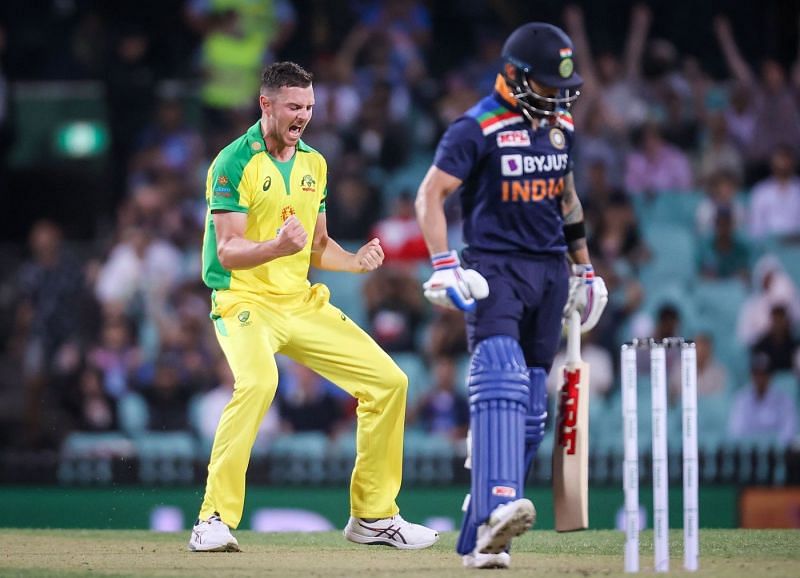 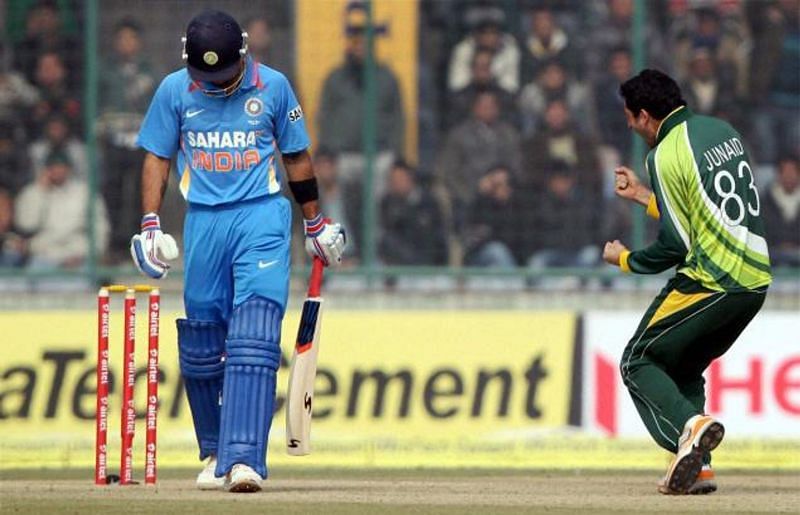 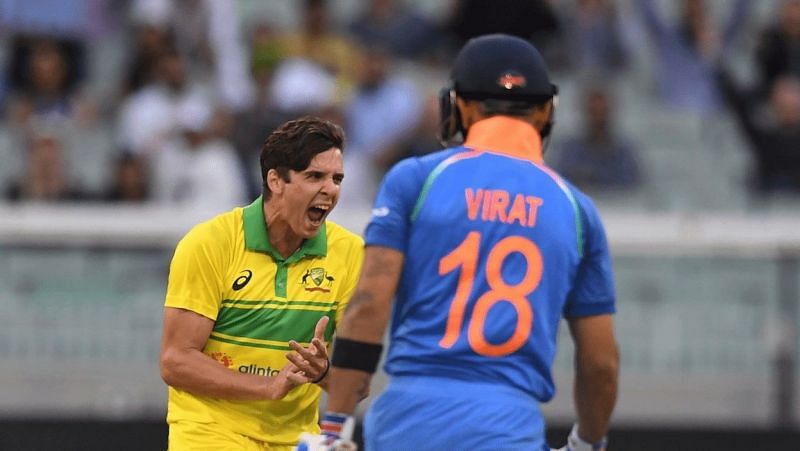 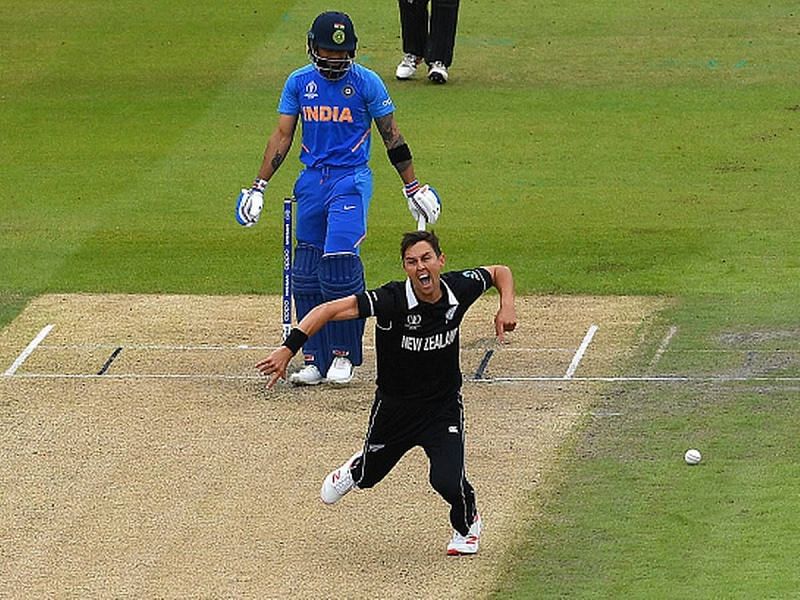 Virat Kohli has built a reputation as one of the best batsmen of the modern era across all formats. His ODI cricket records speak volumes of his achievements and consistency. Virat Kohli has an unbelievable 43 ODI hundreds, out of which 26 have come while chasing. He has terrorized bowling attacks across the world with his aggressive batting.

However, there are a few bowlers, especially in ODI cricket, who’ve had the wood over Kohli and got the better of him on various occasions.

Here we look at 4 such bowlers who have dismissed Virat Kohli for the most number of times in consecutive ODI innings.

The Australian fast bowler has been one of the most successful bowlers against Virat Kohli in ODI cricket. The Indian skipper hasn’t been able to dominate Hazlewood and the latter always seems to get a measure of Kohli.

In early 2020, Asutralia toured India for a three-match ODI series, the third of which was at Bengaluru. Chasing, India needed 287 runs to win the match as well as the series. Thanks to a brilliant partnership of 137 runs between Rohit Sharma and Virat Kohli, India chased down the target and won the series 2-1. However, Hazlewood cleaned up Kohli when he was on 89, ensuring he did not reach his 44th ODI hundred in that game.

The duo next faced off against each other when India began their 2020 tour of Australia with a three-match ODI series. Australia posted a mammoth 374 runs in the first ODI. It was all down to Virat Kohli trying to score big and help India complete a record chase. However, Hazlewood got him early with a short-pitched delivery that he hit straight to short mid-wicket.

Kohli looked good for a century in the second ODI where India were chasing another huge target of 390. He was keeping India in the hunt and taking the game deep but Hazlewood,  his nemesis, again dismissed him for 89 in similar fashion.

Hazlewood got Virat Kohli four times in four innings when he dismissed the latter for 63 in the third ODI. Thus, Hazlewood has been one of the main reasons why Kohli was unable to score even a single ODI century in 2020.

After long, Pakistan were touring India for two T20Is and three ODIs in 2012-2013. Virat Kohli wanted to well. But one man stood between him and his target – left-arm seamer Junaid Khan. On pitches that aided fast bowlers, Junaid Khan did not let Virat Kohli settle early on in his innings and dismissed him in each of the three ODIs.

With scores of 0,6 and 7, Virat Kohli was only able to score 13 runs from three ODIs and Pakistan won the ODI series 2-1. One of the main reasons for Pakistan winning the series was that they were able to keep Kohli quiet. Junaid became the bowler who dismissed Kohli for the second-most number of times in consecutive ODI innings.

In the first ODI, Australia posted a competitive total of 288 in their 50 overs. Chasing 289, India needed runs from their top three, especially Kohli. But that was not to be as young Jhye Richardson got the better of him and dismissed him for only 3 runs. Despite Rohit Sharma’s brilliant 133, India lost the game by 34 runs.

India won the next two games and the series 2-1, but Richardson continued to have the wood on Virat Kohli. He had Kohli caught to deep mid-wicket after scoring a brilliant hundred.

In the third ODI, Kohli was looking good, but a beauty from Richardson proved his undoing as he was dismissed for 46. Thus, Richardson, like Junaid Khan, managed to dismiss Kohli three times in three consecutive ODI innings.

One of the most lethal left-arm swing bowlers in modern-day cricket, Trent Boult has tormented many world-class batsmen with his swing and impeccable line and length. Virat Kohli too struggled against Boult and it was evident in India’s five-match ODI series away to New Zealand in early 2019.

In the second and the third ODIs of the five-match series, Kohli was dismissed by Boult for the scores of 43 and 60 respectively. He just wasn’t able to carry on and get his ODI hundred in that series. After Kohli having rested for the final two ODIs of that series, faced-off against Boult in ODI cricket again in the all-important 2019 ICC World Cup semifinal. The Indian openers weren’t able to tackle the brilliant swing bowling on display from the likes of Boult and Matt Henry and it was upto Kohli again to bail them out of trouble.

However, that was not to be as he was trapped in front by Trent Boult very early in his innings and that proved to be a body blow for the Men in Blue. India couldn’t recover from the blows given by the destructive new-ball bowlers of New Zealand and got knocked out of the World cup.

Pakistan fast bowler Junaid Khan believes that Indian skipper Virat Kohli is the best batsman in the world across all three formats.

Australian pacer Josh Hazlewood has been more than effective against Virat Kohli of late. The 29-year-old has managed to dismiss the Indian skipper in four consecutive ODIs. 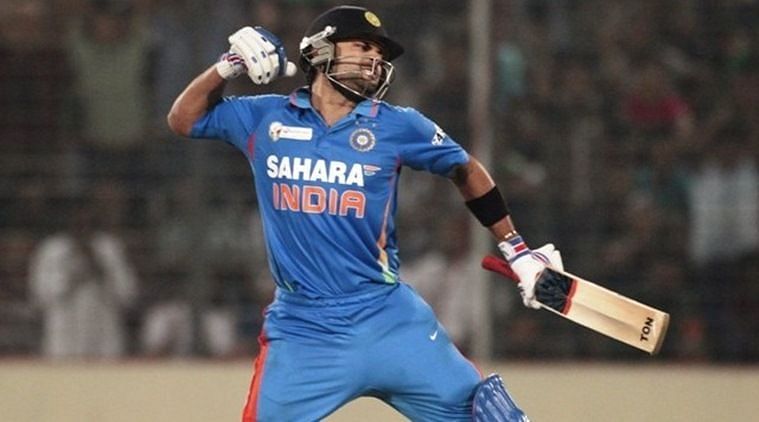 Former Indian opener Gautam Gambhir believes that Indian skipper Virat Kohli’s 183 against Pakistan in 2012 Asia Cup is one of his greatest innings ever. This brilliant knock of his helped India beat Pakistan in a must-win encounter.

Australian fast bowler Josh Hazlewood was hopeful of his side’s batsmen keeping Team India in the field for as long as possible during the upcoming Test series.