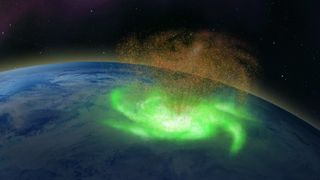 For the first time, astronomers have detected a powerful, 600-mile-wide (1,000 kilometers) hurricane of plasma in Earth‘s upper atmosphere — a phenomenon they’re calling a “space hurricane.”

The space hurricane raged for nearly 8 hours on Aug. 20, 2014, swirling hundreds of miles above Earth’s magnetic North Pole, according to a study published Feb. 22 in the journal Nature Communications.

Made from a tangled mess of magnetic field lines and fast-flying solar wind, the hurricane was invisible to the naked eye — however, four weather satellites that passed over the North Pole detected a formation not unlike a typical terrestrial hurricane, the study authors wrote. The space hurricane was shaped like a funnel with a quiet “eye” at the center, surrounded by several counterclockwise-spinning spiral arms of plasma (ionized gas found all over the solar system, including in Earth’s atmosphere).

“Until now, it was uncertain that space plasma hurricanes even existed, so to prove this with such a striking observation is incredible,” study co-author Mike Lockwood, space scientist at the University of Reading in the U.K., said in a statement. “Tropical storms are associated with huge amounts of energy, and these space hurricanes must be created by unusually large and rapid transfer of solar wind energy and charged particles into the Earth’s upper atmosphere.”

Using a 3D model of the hurricane, the researchers hypothesized that the formation resulted from a complex interaction between incoming solar wind (high-speed gales of plasma periodically released by the sun) and the magnetic field over the North Pole.

While this is the first observed space hurricane, the researchers hypothesize that these “weather” systems could be common events on any planet with a magnetic shield and plasma in its atmosphere.

“Plasma and magnetic fields in the atmosphere of planets exist throughout the universe, so the findings suggest space hurricanes should be a widespread phenomena,” Lockwood said.

Should you fear the space hurricane? Probably not. The upper-atmosphere phenomenon poses little threat to our planet, the researchers noted, but it could impact existing space weather effects, for instance by increasing drag on satellites, or disrupting GPS and radio communications systems.

Capturing lightning in a bottle is the very definition of a tough task, but now physicists have found a way to contain ultracold plasma in a magnetic bottle trap, a breakthrough that could bring physicists one step closer to understanding solar winds and achieving nuclear fusion.

Oceans’ worth of water may remain buried in the crust of Mars, and not lost to space as previously long thought, a new study finds.

Scientists think they’ve spied an alien world that lost its atmosphere — then conjured itself a new one. That’s according to a new analysis of…

Like a comet soaring through the cosmos, the moon is followed by a slender tail of irradiated matter — and Earth passes directly through it once a month.

Jupiter’s otherworldly glimmer of polar auroras is periodically brightened by brief but intense early morning displays known as dawn storms. Now, for the first time, scientists have figured out where dawn storms come from, how they grow, and that they’re even more powerful than expected.