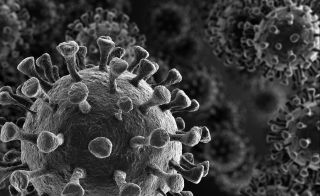 The coronavirus variant that was first identified in the U.K. is now spreading rapidly in the U.S., doubling every 10 days, according to a new study.

That means that the variant, known as B.1.1.7., is growing exponentially in prevalence. B.1.17 made up around 2% of currently circulating strains in the last week of January and likely doubled to 4% of circulating strains 10 days later, and 10 days after that, will double to 8%, then 16% and so on. By March it will likely be the most common variant in the country.

The variant, which seems to be about 40% to 70% more transmissible than previous forms of SARS-CoV-2, the virus causing COVID-19, has “gained a strong foothold across the world,” the authors wrote in a new preprint study posted on medRxiv on Feb. 7 and not yet peer-reviewed.

B.1.1.7 has multiple mutations on its spike protein — which the virus uses to latch onto and invade human cells; those mutations seem to allow the virus to spread faster and more efficiently compared with earlier forms of the virus. B.1.1.7 was first detected in September 2020 in the U.K., and just two months later, it became the dominant variant in the country. The variant has now been detected in at least 80 countries and territories across the globe, according to the World Health Organization.

After B.1.1.7 showed up in Portugal and Ireland, those countries “observed devastating waves of COVID-19,” the authors wrote in the new study. “Our study shows that the U.S. is on a similar trajectory as other countries where B.1.1.7 rapidly became the dominant SARS-CoV-2 variant.” The Centers for Disease Control and Prevention (CDC) predicted that B.1.1.7 would become the dominant strain in the U.S. by March, Live Science previously reported, and unfortunately, this study suggests that prediction is coming true.

To understand how fast B.1.1.7 is spreading in the U.S., researchers examined data from  a half-million  positive test samples in the U.S. collected by genomics company Helix since July 2020. They found that B.1.1.7 likely arrived in the U.S. toward the end of November and had spread to at least 30 states by January.

They also found that while the variant is still at a “relatively low frequency,” in the U.S., it is 35% to 45% more transmissible than earlier forms of the virus; and its prevalence appears to be doubling every 10 days across the country. The variant was most prevalent in Florida, accounting for 4.5% of cases there by the last week of January. That also fits with published data from the CDC showing that most of the 690 known cases of B.1.1.7 came from  Florida, followed by California, according to the CDC. That said, the data didn’t cover the entire U.S. and so variants may be circulating undetected in several states, according to the study.

Labs in the U.S. are sequencing only a small proportion of SARS-CoV-2 samples, so many new and unknown variants may be circulating under the radar, the authors wrote. “The more established surveillance programs in other countries have provided important warnings about variants of concern that can impact the U.S., with B.1.1.7 representing only one variant that demonstrates the capacity for exponential growth,” they wrote.

Given that B.1.1.7 is still not extremely widespread in the U.S., there’s still time to implement surveillance programs and mitigation efforts in the weeks to come, the authors wrote. But “unless decisive and immediate public health action is taken,” the spread of the variant will likely have “devastating consequences” within a few months in the U.S., they added.

Scientists weren’t sure at first whether B.1.1.7 is more deadly and more transmissible than earlier forms of the virus. Some early evidence from the U.K. suggests that it may be 30% more deadly, but that evidence is still uncertain, Live Science previously reported. In any case, B.1.1.7 is “almost certainly destined” to become the dominant strain in the U.S. by March, the authors wrote.

A variant of the new coronavirus that first appeared in Southern California last summer has now spread to more than a dozen U.S. states and several other countries, according to a new study.

A new coronavirus variant has been detected in the U.K., Nigeria and 11 other countries, including the U.S., according to a report by researchers at the University of Edinburgh.

In a handful of instances, the U.K. coronavirus variant has developed a mutation that may help it evade current vaccines, according to news reports.