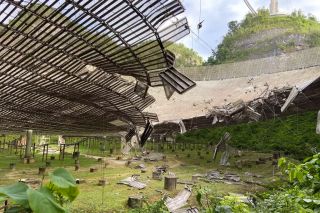 An ongoing investigation of the December collapse of the iconic radio telescope at Arecibo Observatory in Puerto Rico offers early evidence that a manufacturing issue may have contributed to the failure.

The telescope’s massive science platform, which weighed in at 900 tons, was suspended above the vast radio dish by three dozen supporting cables. But in August 2020, one of those cables slipped out of its socket; before the failure could be repaired, a second cable snapped outright in November. The U.S. National Science Foundation (NSF), which owns the site, determined that the platform was too unstable to safely repair and decided to decommission the instrument. Before that could happen, the telescope collapsed on its own on Dec. 1.

Engineers have been investigating the cables since August, and crews have been cleaning up the debris and monitoring environmental concerns since the collapse, observatory director Francisco Cordova said during a panel discussion held on Jan. 21. “The site cleanup and the debris removal really is ongoing,” Cordova told the panel, which is focused on small solar system objects like asteroids in order to inform the National Academies committee that’s putting together the document that will shape planetary science priorities for the next decade. “In general, I think that is moving in the right direction.”

Cordova noted that the telescope’s azimuth arm, which helped steer its instruments, and the hanging dome suspended from it that held antennas and the facility’s radar transmitter, have already been removed from the site. Environmental engineers have also collected two types of potentially hazardous materials that were used on the platform, he said.

The next priority is to clear out remaining platform debris; to reach that material, work crews have deconstructed part of the massive Arecibo reflector dish, which measures 1,000 feet (305 meters) across. The observatory team is also evaluating how much of the dish itself can be rescued, Cordova said.

“There’s still a lot of discussions as to how much of the primary reflector can be saved and how do we go about that,” Cordova said. “Our focus right now is the safe removal of the platform structure, and then we’ll look at it from there.”

Simultaneously, two forensic investigations are evaluating what caused the telescope’s collapse. One investigation focuses on the so-called auxiliary cables. These 12 cables were added in the 1990s, when the observatory installed the massive hanging dome that distinguishes the telescope’s appearance in the movie “Contact” from its previous cameo in James Bond’s “GoldenEye.” The first cable to fail was one of these auxiliary cables, which slipped out of its socket where it connected to one of the three supporting towers surrounding the dish.

“Preliminary investigation has revealed that there was a manufacturing error in those cables — in particular, the socketing procedure wasn’t done appropriately, and that led to advanced degradation of that particular structural element,” Cordova said. “But the final forensics investigation is still to be completed.”

A second forensic investigation focuses on the main cables, which are original to the telescope’s construction in the early 1960s. It was one of these main cables that snapped in November, despite engineers’ estimates that it was only carrying about 60% of the weight it should have been able to withstand.

As they work, site engineers are separating debris that could be relevant to the two forensic examinations. In addition, Cordova said that personnel are evaluating debris being removed for potential historic importance so that items can be saved.

Both the clean-up and investigation processes are ongoing, Cordova emphasized; in addition, the NSF is working separately on understanding the collapse and evaluating the site’s future, including for a report that Congress has requested by late February.

And the answer may never be crystal clear. “Certainly, there’s typically not a single item that contributed but a multitude of items that contributed to the particular failure,” Cordova said. In addition to the facility’s age, the past few years have been hard on Puerto Rico. In 2017, Hurricane Maria battered the island, and over the course of 2020, it experienced more than 10,000 earthquakes.

“Basically, we were shaking the entire time; that certainly could have been a factor,” Cordova said. “That’s being still analyzed by the engineering teams.”

Eight years and one month ago, a Master of Fine Art student at the University of Hertfordshire fitted a beer can with photographic paper and created a low-tech pinhole camera. She then placed the can on a telescope at the university’s Bayfordbury Observatory and eventually forgot about the project.

Scientists captured this striking image of the Apollo 15 landing site by shooting a powerful radar signal from Earth into space and bouncing it off the lunar surface.

The camera core for the future Vera C. Rubin Observatory has snapped its first test photos, setting a new world record for the largest single shot by a giant digital camera.