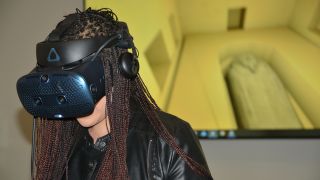 A VR headset provides Jessica Johnson, a doctoral candidate in Egyptology at UC Berkeley, with a tour of a 2,500-year-old Egyptian tomb.
(Image credit: UC Berkeley, photo by Yasmin Anwar)

The tomb of an ancient Egyptian called “the Doctor,” hidden beneath a pyramid and inscribed with mystical spells invoking gods and demonic guardians, comes to life in a new immersive virtual reality experience.

By just popping on some VR goggles, you could be the Egyptologist who enters the tomb to explore its depths.

Egyptology experts at the University of California Berkeley have created “The Book of the Dead in 3D,” which uses VR to offer a rare first-person glimpse of an Egyptian burial site. Its 3D environments and reconstructions of artifacts present an up-close perspective on traditions surrounding the deities, demons, and magic spells of death and the afterlife in ancient Egypt, University of California, Berkeley (UC Berkeley) representatives said in a statement.

“You can have the experience of entering a tomb, walking around a coffin and interacting with these beautiful funerary texts and images,” said project lead Rita Lucarelli, an associate professor of Near Eastern Studies and faculty curator of Egyptology at the Hearst Museum at UC Berkeley.

“In Egyptology, printed books are still more valued than digital projects,” Lucarelli said. “But I think this trend is slowly changing, as we use new tools to document these ancient treasures.”

When a user of the interactive dons the VR headset, they are transported to Saqqara, site of a vast necropolis and pyramid field in Memphis, about 20 miles (32 kilometers) south of Cairo. There, they enter the tomb of a court physician called Psamtik — nicknamed “the Doctor” — whose sarcophagus dates to Egypt’s 26th Dynasty, around 664 B.C. to 525 B.C. Carvings on the stone include numerous spells invoking the protection of more than a dozen gods, against attacks from foes in the afterlife.

William Randolph Hearst purchased the heavy stone lid of Psamtik’s sarcophagus, which weighs about 7,600 lbs. (3,447 kilograms), during a trip to Egypt in 1900. Three years later, Hearst donated the lid to the collection of what is now called UC Berkeley’s Phoebe Apperson Hearst Museum of Anthropology, according to the website for The Book of the Dead in 3D. Psamtik served as the pharaoh’s head physician as well as “chief of the Libyans” — a type of overseer of foreign mercenaries, according to the Hearst Museum.

But the Doctor was never laid to rest in his sarcophagus, which was empty when the tomb was discovered (though a coffin in a nearby chamber held a woman thought to be Psamtik’s wife). To this day, why Psamtik’s mummy wasn’t found there remains a mystery, the Hearst Museum says.

In addition to Psamtik’s sarcophagus lid, Lucarelli and her colleagues have scanned, digitized and 3D-modeled Egyptian artifacts from the Hearst Museum and other collections in California since 2015. Their goal is to preserve ephemeral objects in a digital format, and to ensure that objects will remain available for academic study and research even after repatriation to their countries of origin, according to the statement.

Using VR video-game technology adds fun and excitement to the tours, “but my main aim is for this project to be strong academically and useful for scholars,” Lucarelli said in the statement.

“The Book of the Dead in 3D” immersive interactive will launch in 2021 at the Hearst Museum, according to the statement.

Categories: News
Tagged: according to the Hearst Museum, said in a statement, The Book of the Dead in 3D

An ancient Egyptian pharaoh that may be King Tut’s father has a new face, with regal features and a serene expression shaped by digital reconstruction. Though this is the most accurate reconstruction of the man to date, long-standing questions about his identity remain unanswered.

Three early churches and their adjacent living quarters, some scrawled with ancient biblical graffiti, have been found in Egypt. The new discovery is shedding light on the life monks led within ancient Egypt’s Coptic Church, according to the Egyptian Ministry of Tourism and Antiquities.

Archaeologists in Egypt have discovered the oldest pet cemetery on record — a nearly 2,000-year-old burial ground filled with well-loved animals, including the remains of cats and monkeys still wearing collars stringed with shell, glass and stone beads, a new study finds.