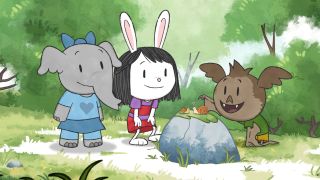 Young children who are just starting to explore the world around them often have plenty of questions, and a new animated series from PBS Kids not only encourages endless questions, but it also shows youngsters how they can use science to find answers.

In “Elinor Wonders Why,” an inquisitive bunny named Elinor leads her friends in adventures around Animal Town. Along the way, they encounter new challenges and discover mysteries of the natural world that they’ve never seen before and don’t understand.

But Elinor and her animal companions also find that observation and investigation can help them piece together clues to find solutions and solve problems — just like scientists do.

Both of the “Elinor Wonders Why” co-creators — Jorge Cham and Daniel Whiteson — brought a science background to the series. Cham, also the creator of the nerdy online comic “Piled Higher and Deeper” (PHD Comics), formerly taught at Caltech and conducted research on neural implants. Whiteson, a physics professor at the University of California, Irvine, researches exotic particles using the Large Hadron Collider at the European Organization for Nuclear Research (CERN) in Geneva, Switzerland.

The pair previously co-authored the humorous popular science book “We Have No Idea: A Guide to the Unknown Universe” (Riverhead Books, 2017), about unanswered questions in physics. For “Elinor Wonders Why,” they wanted a show that also confronted unknowns, but at a level suitable for preschool-age kids, Cham told Live Science.

“Kids have lots of questions about everything, they want to know how everything works,” Cham said. “This was an opportunity to create something that gives kids confidence about that — and gives them mental tools that they can use in situations when they have questions.”

The questions posed in each episode by Elinor and her best friends — a bat named Ari and an elephant named Olive — had to be questions that kids would be likely to ask, Whiteson explained. But the questions also had to be ones that kids could solve for themselves through investigation and deduction.

“It’s really about empowering the audience’s own curiosity,” Whiteson said. “We tended to focus on questions that you could see the kids answering themselves with their own observations. They could use simple science techniques like taking notes, comparing things and doing experiments, to find answers to their own questions.”

In one episode, while Elinor and her friends are camping out in her backyard, they learn to silently communicate with each other after watching the flashing signals of glowing fireflies. Another episode explores the different ways that animals keep themselves clean, after Ari declares that he has decided to stop taking baths.

“We believe nothing is beyond being able to explain it to somebody,” Cham said. “It’s just a matter of finding the right language and how to approach it.”

The natural world isn’t a one-size-fits-all experience. Some children live near parks or have backyards, while others learn about plants and animals through interactions in their homes. As Cham and Whiteson imagined Elinor investigating science, they created stories that would be accessible to audiences regardless of their access to nature.

“We have episodes where it’s just about seeing birds out your window, or growing plants on your balcony,” Whiteson said. “The same theme of curiosity and enjoyment and wonder of nature can be applied when all you have is a window.”

“Elinor Wonders Why” is available to stream on the PBS Kids website.

Categories: News
Tagged: deduction, Elinor Wonders Why, PBS Kids website, Piled Higher and Deeper, We Have No Idea: A Guide to the Unknown Universe

With a rocky year of pandemic-related educational disruptions ahead, many parents are looking for ways to help their kids learn at home. Toys advertised as teaching STEM might seem like one way to fill the gap. But do they really work?

Scientists have successfully “talked” to a sleeping person in real-time by invading their dreams, a new study shows. The researchers say it’s like trying to communicate with an astronaut on another world.

Fish school, insects swarm and birds fly in murmurations. Now, new research finds that on the most basic level, this kind of group behavior forms a new kind of active matter, called a swirlonic state.