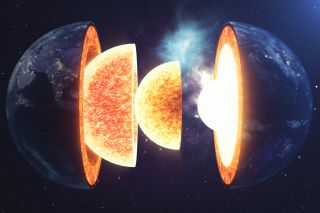 At that time, just 1.5 billion years after Earth formed, the mantle — the layer of silicate rock between the crust and the outer core that was more active in the past — heated up, causing magma from that layer to ooze into fragments of older crust above it. Those fragments acted as “seeds” for the growth of modern-day continents.

The researchers found evidence for this growth spurt hiding in ancient zircon crystals in stream sediments in Greenland. These extremely durable crystals — made up of zirconium silicate — formed during the growth spurt around 3 billion years ago.

“There have probably been multiple crust-forming events in the Earth’s history,” lead researcher Chris Kirkland, a professor of geoscience at Curtin University in Australia, told Live Science. “But this global injection event 3 billion years ago is definitely one of the biggest.”

Before this massive growth period, Earth’s ancient crust was much thinner and weaker than it is today. Eventually, it broke apart into crustal fragments that served as floating “life rafts” from which new crust could grow.

“We think of crust as this buoyant material that sits on top of the mantle,” Kirkland said. “This means it constantly gets an injection of new material coming from below. The longer it sits on top, the more new material is injected into it and the larger it becomes.”

Mantle temperatures peaked at the time, due to the radioactive decay of elements like uranium and potassium in Earth’s core, as well as from residual heat left the planet’s formation. Since that globe-wide peak in temperatures spurred the process, the crust continued to balloon on a massive scale for a period of roughly 200 million years, according to the researchers.

At the end of this period, the first continents began to take shape, eventually allowing for the development of complex life on land around 400 million years ago.

The evidence for this growth spurt appeared ingrains of zircon crystals, less than 100 microns in size (less than the width of a human hair), that had been eroded from rocks and accumulated within stream sediments in West Greenland.

“Zircon is like the geologist’s favorite toolkit, because it can tell us so much,” Kirkland said. “The crystal is very robust, it traps information about its origins within itself.”

Like trees, the crystals have growth rings, caused by periods of magma injection. To accurately age these rings, Kirkland and his colleagues blasted the crystals with an ion beam — a beam of charged particles capable of accurately fracturing the super-strong miniature crystals — to separate the ring segments for individual analysis.

By dating the isotopes — versions of elements with a different number of neutrons in each atom — within each “ring,” they found that the crystals were made up of ancient (4 million-year-old) and newer (3 million-year-old) crust. This supported their hypothesis that older crustal fragments acted as seeds for newer crust to form.

“It is pretty incredible that from these individual grains you can piece together the ancient history of our planet,” Kirkland said. “It’s kind of like being able to tell the age of someone’s parents just by looking at them.”

Other studies carried out by different researchers in Australia, South Africa and Scotland — all places where you can find exposed ancient rocks — have found similar results, which proves that this was also part of a massive global injection event.

In addition to the “wow” factor of discovering how Earth’s outer shell formed so long ago, the results could also be used to help locate new sources of depleted metals for mining.

“Western Australia is a good example,” Kirkland said. “We have quite a lot of gold, iron and nickel reserves, but most of these are found in shallow crusts. As we start to use up these resources, we need to look for new ones in the deeper crust.”

However, he admitted that these new resources would be harder to access and mining them would be a huge logistical challenge. Instead, he thinks the real value in his team’s discovery is academic.

“It’s all about understanding how these formative little bits of crust that we live on have developed,” Kirkland said. “Being able to piece together things that happened billions of years ago from these tiny grains is amazing.”

The study was published Jan. 12 in the journal Nature Communications.

From the deepest ocean trench to the tallest mountain, plate tectonics explains the features and movement of Earth’s surface in the present and the past.

Before diamonds can begin growing deep underground in Earth’s mantle, they need a little zap from an electric field, a new study finds.