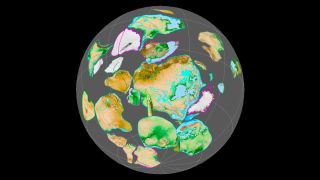 The supercontinent of Nuna-Rodinia broke up at the end of the Proterozoic era, ending a billion years of no new mountain formation, a new study says.
(Image credit: Fama Clamosa/ CC 4.0)

For nearly a billion years during our planet’s “middle age” (1.8 billion to 0.8 billion years ago), Earth‘s mountains literally stopped growing, while erosion wore down existing peaks to stumps, according to a study published Feb. 11 in the journal Science.

This extreme mountain-forming hiatus — which resulted from a persistent thinning of Earth’s continental crust — coincided with a particularly bleak eon that geologist’s call the “boring billion,” the researchers wrote. Just as Earth’s mountains failed to grow, the simple life-forms in Earth’s oceans also failed to evolve (or at least, they evolved incredibly slowly) for a billion years.

According to lead study author Ming Tang, the mountain of trouble on Earth’s continents may have been partially responsible for the slow going in Earth’s seas.

“Continents were mountainless in the middle age,” Tang, an assistant professor at Peking University in Beijing, China, told Live Science in an email. “Flatter continents may have reduced nutrient supply [to the ocean] and hindered the emergence of complex life.”

At the convergent boundaries where Earth’s continental plates clash, mountains soar upward in a process called orogenesis. The continental crust at these boundaries is thicker on average and buoyed by magma, lifting surface rocks up to dizzying heights. Meanwhile, erosion and gravity push back against the peaks; when the tectonic and magmatic processes below the surface stop, erosion wins out, whittling mountains away.

Because even the mightiest mountains disappear over time, studying ancient Earth’s crustal thickness can be the best way to gauge how actively mountains formed in the past. To do that, the study authors analyzed the changing composition of zircon minerals that crystallized in the crust billions of years ago.

Today, tiny grains of zircon are easily found in sedimentary rocks all over the planet’s surface. The precise elemental composition of each grain can reveal the conditions in the crust where those minerals first crystallized, eons ago.

“Thicker crust forms higher mountains,” Tang said. Crustal thickness controls the pressure at which magma changes composition, which then gets recorded by anomalies in zircons crystallizing from that magma, he added.

In a previous study published in January in the journal Geology, Tang and colleagues found that the amount of europium embedded in zircon crystals could reveal crust thickness at the time those crystals formed. More europium signifies higher pressure placed on the crystal, which signifies thicker crust above it, the researchers found.

Now, in their new study in Science, the researchers analyzed zircon crystals from every content, and then used those europium anomalies to construct a history of continental thickness going back billions of years. They found that “the average thickness of active continental crust varied on billion-year timescales,” the researchers wrote, with the thickest crust forming in the Archaean eon (4 billion to 2.5 billion years ago) and the Phanerozoic (540 million years ago to the present).

Right between those active mountain-forming eras, crustal thickness plummeted through the Proterozoic eon (2.5 billion to 0.5 billion years ago), reaching a low during Earth’s “middle age.”

The eon of nothing

It may not be a coincidence that Earth’s flattest eon on land was also its most “boring” eon at sea, Tang said.

By contrast, Tang said, the Cambrian explosion, which occurred just 300 million years later, introduced almost all major animal groups that we see today. For whatever reason, life evolved achingly slowly during the “boring billion,” then jump-started just as the crust began thickening.

What’s the correlation? If no new mountains formed during this period, then no new nutrients were introduced to Earth’s surface from the mantle below, the researchers wrote — and a dearth of nutrients on land also meant a dearth of nutrients making their way into the ocean through the water cycle. As mountain forming stalled for a billion years, a “famine” of phosphorus and other essential elements could have starved Earth’s simple sea critters, limited their productivity and stalled their evolution, the team suggests.

Life, and mountains, eventually flourished again when the supercontinent Nuna-Rodinia broke apart at the end of the Proterozoic eon. But before then, this gargantuan continent may have been so massive that it effectively altered the structure of the mantle below, stalling plate tectonics during the “boring billion” and resulting in an eon of crustal thinning, the researchers wrote. But further research is needed to fully solve the mystery of Earth’s vanishing mountains.

From the deepest ocean trench to the tallest mountain, plate tectonics explains the features and movement of Earth’s surface in the present and the past.