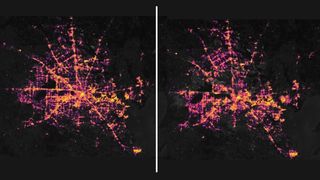 The left image shows the Houston area in the middle of the night on Feb. 7, before a potent arctic weather system hit the state. The right image shows the power outages still occuring on Feb. 16.
(Image credit: NASA Earth Observatory/Joshua Stevens)

New satellite photos captured the widespread and disastrous power outages that plunged the Houston area into darkness this week, when a powerful Arctic weather system swept through the state.

Millions of Texas residents lost power when the polar air mass hit the state on Feb. 13, according to a NASA statement. More than 1 million people in the Houston area were still without power at 1 a.m. on Feb. 16, when the Suomi NPP satellite soared by and measured nighttime light emissions and reflections from the region.

A team of scientists at NASA’s Goddard Space Flight Center (GSFC) and Universities Space Research Association (USRA) processed the data to produce a snapshot of the power outages. Compared with an image captured before the cold snap, in the early morning on Feb. 7, sprawling patches of the Feb. 16 image appear pitch-black rather than brightly illuminated.

The rolling blackouts began as Texas residents turned on their heaters, placing much more demand on the power grid than is typical for winter, The Associated Press reported. In general, Texas has a generating capacity of about 67,000 megawatts in the winter, compared with 86,000 megawatts in the summer, when temperatures soar and the state’s energy demands usually peak.

But when the polar weather system hit, 28,000 megawatts from natural gas, coal and nuclear plants and 18,000 megawatts from wind and solar sources fell offline, as gas supply lines froze and some turbines stopped spinning, according to the AP. In cold, northern states, these power sources are routinely protected against winter weather and energy reserves are stored in advance of storms; Texas did not apply these same winterization guidelines, AP reported.

The NASA/USRA team has documented many blackouts in this way, but it’s unusual to see such a large power outage in a developed country, Miguel Román, director of the Earth from Space Institute at USRA, said in the statement. He also noted that Texas is the only state that has isolated its power grid from the rest of the country, to avoid federal regulation.

The weather-related outages have already led to several deaths in Texas, as some people died while attempting to keep warm in their powerless homes, The Associated Press reported.

Categories: News
Tagged: according to a NASA statement, The Associated Press reported

It sounds like science fiction: giant solar power stations floating in space that beam down enormous amounts of energy to Earth. And for a long time, the concept – first developed by the Russian scientist, Konstantin Tsiolkovsky, in the 1920s – was mainly an inspiration for writers.

High above the North Pole, the polar vortex, a fast-spinning whirl of frigid air, is doing a weird shimmy that may soon bring cold and snowy weather to the Eastern U.S., Northern Europe and East Asia for weeks on end, meteorologists say.