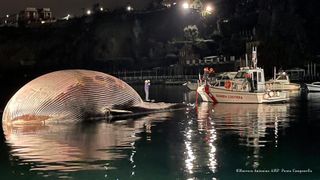 The Italian Coast Guard tows the carcass of a large finback whale into the port of Naples.
(Image credit: Coast Guard of Italy)

Officials discovered the carcass on Sunday (Jan. 17), before towing it to the nearby port at Naples. The whale measured about 65 feet (20 meters) long and likely weighed more than 77 tons (70 metric tons) — likely making the corpse “one of the largest” ever found in the Mediterranean Sea, according to the agency.

Coast Guard divers first discovered the whale after a young calf swam into the Sorrento harbor in a state of distress, according to news reports. The calf reportedly rammed its head into the harbor walls several times before retreating back underwater; when divers followed it, they discovered the fin whale’s corpse.

The calf is presumed to be the dead whale’s offspring, and the Coast Guard is monitoring for signs of the young whale’s return. Meanwhile, marine biologists in Naples are working to ascertain what killed the whale.

Finback whales (also known as fin whales) are the second-largest animals on Earth, after the iconic blue whale. Finbacks can grow to be 85 feet (25 m) long and weigh up to 80 tons (72 metric tons), according to the National Oceanic and Atmospheric Administration (NOAA). They are considered endangered after commercial whaling decimated the global finback population over the last century.

Today, commercial whaling is illegal throughout most of the world, and boat strikes pose the biggest threat to finbacks, according to NOAA.

More than 100 miles (161 kilometers) of Israel’s normally pristine Meditteranean coastline have been stained with thick globules of tar that washed up after an oil spill off the coast of the country last week. Authorities have yet to identify the culprit, but they say it is harmful to both humans and marine life.