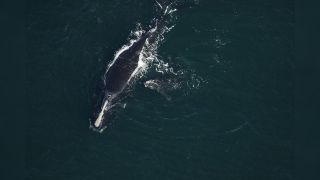 A photograph of the whale calf believed to have been killed, taken while it was still alive with its mother.
(Image credit: Florida Fish and Wildlife Conservation Commission/NOAA)

The male calf was 22 feet (7 meters) long and possibly just 2 months old when it was found with boat wounds on the shore at Anastasia State Park near St. Augustine, according to The Associated Press.

This is the second recorded death of a right whale calf during the current calving season, which runs from mid-November to mid-April. The baby whale likely belonged to a 19-year-old female named Infinity who was sighted on Tuesday (Feb. 16) with fresh cuts on her left side, suggesting she was also hit by a vessel, according to a statement released by the National Oceanic and Atmospheric Administration (NOAA).

“This is a very sad event,” Blair Mase, Southeast Region Marine Mammal Stranding Coordinator at NOAA, told The Associated Press. “Every mortality that occurs really has a devastating impact on the population as a whole, because they are one of our most critically endangered whales in the world,” she said.

Fewer than 400 North Atlantic right whales (Eubalaena glacialis) remain on Earth, according to NOAA. Whaling in the 1890s drove the species to the brink of extinction. Though whale hunting is mostly illegal, boat strikes and entanglement in fishing gear regularly kill the whales, keeping their numbers low, Live Science previously reported.

This baby whale had propeller wounds on its head and back, as well as broken ribs and other injuries consistent with impact trauma, according to a Facebook post by FWC Fish and Wildlife Research Institute.

The Facebook post also said that the captain of a 54-foot sportfishing vessel “reported hitting a whale near the entrance to St. Augustine Inlet” on Friday evening (Feb. 12), the day before the calf was found. The vessel was grounded after the impact to prevent it from sinking, but all the occupants are safe, according to the post.

NOAA and their collaborating partners in the Marine Mammal Stranding Network are performing a necropsy, or animal autopsy, on the calf to establish exactly how the calf died and what condition it was in before death, according to the NOAA statement.

This latest death adds to an ongoing Unusual Mortality Event (UME), or a period of increased death rates in the species. NOAA has recorded 33 North Atlantic right whale deaths in U.S. and Canadian waters since the event began in 2017.

NOAA is urging people driving vessels of all sizes to slow down and remain alert in areas containing North Atlantic right whales. The whales are particularly vulnerable during the calving season, when mothers are nursing their young, according to the statement.