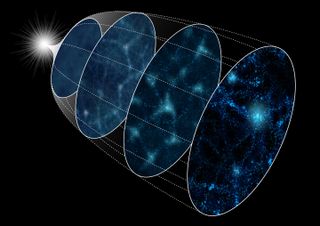 Diagram of the evolution of the universe from the inflation (left) to the present (right). The reconstruction method winds back the evolution from right to left on this illustration to reproduce the primordial density fluctuations from the current galaxy distribution.
(Image credit: The Institute of Statistical Mathematics)

Cosmologists are pressing rewind on the first instant after the Big Bang by simulating 4,000 versions of the universe on a massive supercomputer.

The goal is to paint a picture of the immediate aftermath of the Big Bang, when the observable universe suddenly expanded 1 trillion trillion times in size in the tiniest sliver of a microsecond. By applying the method used for the simulations to real observations of today’s universe, researchers hope to arrive at an accurate understanding of what this inflationary period looked like.

“We are trying to do something like guessing a baby photo of our universe from the latest picture,” study leader Masato Shirasaki, a cosmologist at the National Astronomical Observatory of Japan (NAOJ), wrote in an email to Live Science.

Today’s universe shows variations in density, with some patches rich in galaxies and others relatively barren. One promising hypothesis for this uneven distribution of visible matter is that, at the time of the Big Bang, there were already quantum fluctuations, or random, temporary changes in energy, in the tiny, primordial universe, Shirasaki said.

When the universe expanded, these fluctuations would have expanded, too, with denser points stretching into regions of greater density than their surroundings. Gravitational forces would have interacted with these stretched-out filaments, causing galaxies to clump along them.

But gravitational interactions are complex, so trying to rewind this inflationary period to understand how the universe would have looked before it is very challenging. Cosmologists essentially need to remove the gravitational fluctuations from the equation.

The researchers developed a reconstruction method to do just that. To find out if the reconstruction was accurate, though, they needed some way to test it. So they used NAOJ’s ATERUI II supercomputer to create 4,000 versions of the universe, all with slightly different initial density fluctuations. The researchers allowed these virtual universes to undergo their own virtual inflations and then applied the reconstruction method to them, to see if it could get them back to their original starting points.

The results, published Jan. 4 in the journal Physical Review D, were promising.

“We find that a reconstruction method can reduce the gravitational effects on observed galaxy distributions, allowing us to extract the information of initial conditions of our universe in an efficient way,” Shirasaki said.

The reconstruction has been applied to real-world galaxy data before, he added, but the new study shows that it can work on the universe’s inflation period, too. The next step, Shirasaki said, is to apply the reconstruction to real observations of the cosmic web. Those observations have already been made by a telescope in New Mexico as part of the Sloan Digital Sky Survey.

A weird, super-powerful particle that’s not truly a particle could have dominated the universe when it was just a second old, releasing a flood of ripples that permeated all of space-time.

Astrophysicists have an idea that could help to solve two mysteries: the reason for the bizarre abundance of super-high-energy radiation shooting from the center of our galaxy and the identity of invisible stuff called dark matter that has perplexed the world since its discovery some 50 years ago.

One of the lingering mysteries of the universe is why anything exists at all.