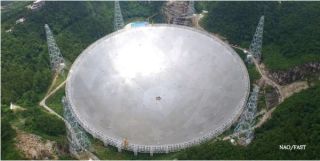 In Pingtang, Guizhou province stands the Five-hundred-meter Aperture Spherical Telescope (FAST), the largest radio telescope in the world, surpassing the Arecibo Observatory, which stood as the largest in the world for 53 years before the construction of FAST was completed in 2016. Following two cable failures earlier this year, Arecibo’s radio telescope collapsed in November, shutting down the observatory for good. Now, FAST is opening its doors to astronomers from around the world.

“Our scientific committee aims to make FAST increasingly open to the international community,” Wang Qiming, the chief inspector of FAST’s operations and development center told the news agency AFP during a visit to the telescope, according to the French news site AFP.

China will accept requests this upcoming year (2021) from foreign scientists looking to use the instrument for their research, according to the report.

With its massive 1,600-foot (500 meters) diameter dish, FAST is not only larger than the now-destroyed Arecibo telescope, but it’s also three times more sensitive. FAST, which began full operations in January of this year, is also surrounded by a 3-mile (5 kilometers) “radio silence” zone in which cellphones and computers are not allowed.

“We drew a lot of inspiration from its [Arecibo’s] structure, which we gradually improved to build our telescope,” Qiming said.

Radio telescopes like FAST use antennas and radio receivers to detect radio waves from radio sources in the cosmos, like stars, galaxies and black holes. These instruments can also be used to send out radio signals and even reflect radio light from objects in the solar system (like planets) to see what information might bounce back.

Researchers may use FAST to not just explore the universe but also to study alien worlds, determining whether or not they rest in the “goldilocks zone” near their host star, and also search for alien life.

Famously, in 1974 at Arecibo, scientists working on the search for extraterrestrial intelligence, or SETI, sent out an interstellar radio message to the globular cluster M13 in the hopes of receiving confirmation of intelligent extraterrestrial life. The message was co-authored by astronomer and science communicator Carl Sagan, helping to popularize Arecibo and radio astronomy in general.

An ongoing investigation of the December collapse of the iconic radio telescope at Arecibo Observatory in Puerto Rico offers early evidence that a manufacturing issue may have contributed to the failure.

Earth’s most recent brush with asteroid danger was eight years ago, when a space rock the size of a six-story building came seemingly out of nowhere, injuring 1,200 people when it exploded over Chelyabinsk, Russia.

On March 5, wave hello to the most infamous asteroid that won’t slam into Earth in 2029. Scientists sure will.