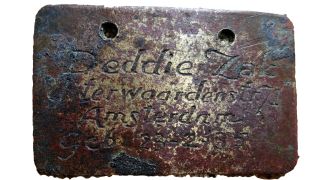 Archaeologists have unearthed the identity tags of four children murdered by the Nazis at Sobibor death camp in eastern Poland.

Each metal tag is different and was likely given to the children by their parents prior to being separated from them. The parents may have hoped the ID tags would help the children be returned home, according to Yoram Haimi, an archaeologist at the Israel Antiquities Authority, who is part of a team excavating the site.

“Every small artifact that we have brings a story. It’s the story of the community from where they came to Sobibor,” Haimi, whose uncle was killed at the camp, told Live Science.

During the Holocaust, Nazis murdered 6 million Jews, as well as people with disabilities, Roma, Poles and other Slavic people. At Sobibor alone, about 250,000 people — mostly Polish Jews — were killed between May 1942 and October 1943, according to Encyclopedia Britannica.

Sobibor connected to a railway line that brought in Jews from around Europe, and it was near the camp’s railway platform that Haimi and his colleagues found the first tag, which belonged to 6-year-old Lea Judith De La Penha who was killed in 1943, according to a statement released by the Israel Antiquities Authority.

Their excavations also uncovered the camp’s gas chamber, which was a 3,700-square-foot (350 square meters) building with eight rooms.

Based on those dimensions, “we can say that every time you can put between 800 to 900 people in this gas chamber, turn on the motor of the tank and kill in 10 minutes 900 people. It’s a factory of killing,” Haimi said.

The team unearthed the other three tags between 2012 and 2014 in the camp’s “killing area,” which contained the gas chamber, crematorium and a mass grave. The tags belonged to 8-year-old Deddie Zak, 12-year-old Annie Kapper and 11-year-old David Juda Van der Velde, who were murdered by the Nazis in 1943. Only half of David Juda Van der Velde’s tag was found, and it shows signs of fire damage. “The Germans burned his body and on his neck was this tag,” Haimi said.

Each tag lists the child’s name, their date of birth and hometown, which helped archaeologists learn more about their short lives. To determine the children’s origins, the researchers contacted the Herinneringscentrum Kamp Westerbork in the Netherlands, which was used as a transit camp during the Holocaust but is now a visitor center and memorial site.

All of the children came from Amsterdam and could be traced through train records of Jewish people sent to Sobibor from Western Europe. Some of the newly identified youngsters were part of a mass deportation of some 1,300 little children, just 4 to 8 years old, who were separated from their parents and sent to the gas chambers as soon as they arrived at Sobibor, according to the statement.

Haimi has conducted more extensive research to trace other people from artifacts found at the excavation site. In some cases, he has spent years trying to identify them.

“It’s like a puzzle, it’s a lot of work in the archives to look for documents, lists, about information of transport,” Haimi said.

Haimi believes that the staggering reported death toll of Sobibor may understate the true number killed there. He said that Jewish people arrived at the camp on trains that were not on the lists used to calculate the death toll; the figure, he said, also didn’t account for all the people taken there on foot and by truck, or by other means.

“We will never know how many Jewish people [were] killed in this camp. I can tell you from the size of the mass graves — because they are huge — it must be much more than 250,000,” Haimi said.

Some prisoners were kept alive for forced labor in Sobibor. They were made to remove the bodies of victims from the gas chambers and bury them in the mass graves or forced to work in the administration and reception areas of the camp, according to the U.S. Holocaust Memorial Museum. But on Oct. 14, 1943, there was an uprising.

Approximately 300 prisoners managed to break out of the killing area and made a bid for freedom. Most of the prisoners died trying to escape or were soon recaptured. Just 50 succeeded in escaping Sobibor and survived the war, according to the U.S. Holocaust Memorial Museum.

Camp officials and guards dismantled the killing area after the revolt and murdered the remaining prisoners, according to the Holocaust museum. The Nazis then liquidated Sobibor in November 1943, having already held discussions about converting it for other purposes prior to the uprising. They ultimately destroyed the camp and planted trees over the site, according to the U.S. Holocaust Memorial Museum.

Categories: News
Tagged: according to Encyclopedia Britannica, according to the U.S. Holocaust Memorial Museum, Roma, the Holocaust

In 1520, Indigenous people in Zultépec in what is now Mexico captured a Spanish caravan of about 450 people. Over the next eight months, they ritually sacrificed all of the captives and likely ate them, archaeologists recently discovered.