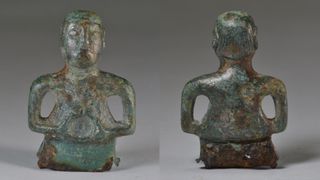 A tiny statue of a Celtic deity dating to the Iron Age wears a haircut that was widespread — and widely mocked — decades ago, but is now enjoying an unexpected comeback: the mullet.

Worn with the hair cut short in front and long at the back of the head, mullets surged in popularity during the 1980s. Archaeologists recently discovered the same hairstyle on a copper figure measuring about 2 inches (5 centimeters) high, found in an Iron Age site in Cambridgeshire, England, and dating to the first century A.D.

Like countless soccer players, hockey stars, rock musicians and mallgoers that came thousands of years later, the statue’s hair is cropped close to its head around the crown and flows long down its back, representatives of the National Trust in the United Kingdom said in a statement. Also like many male mullet-wearers from the 1980s, the statue sports a tiny mustache.

In 2018, archaeologists began excavating a site at Cambridgeshire’s Wimpole Estate, uncovering a rural settlement spanning several centuries — from the late Iron Age, beginning around the first century B.C., to the early Roman period. In addition to the statue, they found about 300 metal objects, including fittings from a Roman military uniform; cosmetic tools; coins and nails; and fittings for horse harnesses.

Though researchers initially thought the small statue represented Cernunnos, the Celtic god of fertility, they later determined it was another, unknown deity. The figure likely served as a handle for a spatula that mixed wax or medicines, according to the National Trust. Its hands clasp a torc — a circular ornament worn around the neck — that may have once held a decorative inlay, Shannon Hogan, a National Trust archaeologist for the East of England, said in the statement.

“This figure is an exceptional find and thanks to careful conservation and cleaning, we can now see some remarkable detail,” Hogan said.

However, it is unknown if the deity’s impressive mullet was meant to represent the overall popularity of the haircut in the region at that time, or if that was how the god’s hair was typically styled in statues and other art, Hogan added.

“We have extremely limited knowledge of what ordinary people of England at that time looked like, so this beautifully detailed figure might just be giving us a tantalizing glimpse into their appearance, or how they imagined their gods,” Hogan said.