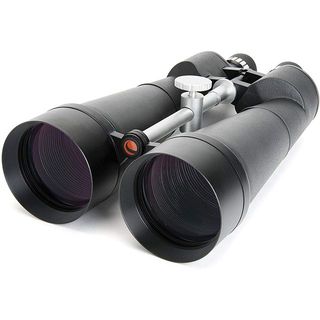 Celestron’s SkyMaster 25×100 Astro Binoculars are great for skygazers and sea-watchers alike, and this powerful pair of binoculars is 47% off for Amazon Prime Day.

With a price tag of just $219 (down from  $419), the SkyMaster 25×100 binoculars are nearly half off. They have ultra sharp focus thanks to their 25 times magnification and massive 100 millimeter objective lenses, the largest aperture Celestron has available in a binocular.

Celestron  SkyMaster 25×100 Astro Binoculars  | Save  $200| Now $219
This computerized telescope is a great starter one for budding astronomers with Celestron’s GoTo technology to automatically find targets like Jupiter or Saturn after calibration. View Deal

These binoculars include a tripod adapter for those who want to mount their binoculars to a tripod for stability when looking at the night sky. They’re also durable and water-resistant because of a protective and rugged body that allows for amazing grip.

And if you live in a dim environment, never fear: The SkyMaster 25×100 binoculars are perfect for those who are stargazing in dim light near dusk or down. The high-quality BaK-4 prisms give excellent light transmission, which makes even images in the dim sky sharp and bright.

In fact, Celestron’s SkyMaster 25×100 binoculars made Space.com’s list of the best binoculars of 2020.

There are plenty of other great Celestron deals this Prime Day, you can

Celestron, maker of high-quality telescopes and other skywatching gear, has some great deals for Amazon Prime Day this year, including its NexStar 130SLT computerized telescope, which is on sale for 33% off.

There’s nothing quite like getting up close to Earth’s incredible wildlife and this Cyber Monday we’ve scanned the retailers to help you find the very best deal on your next (or first!) binocular — whether you’re wanting to observe birds up close or scour the surface of the moon, you can get a great discount today.

Whether your child is curious enough to start an amateur bird-watching hobby, or they are intent on looking at anything outdoors up-close, the right binoculars will keep them wide-eyed with wonder for days on end.

January’s full moon, popularly known as the wolf moon, is almost upon us. Here’s “howl” to watch it shine brightly this Thursday (Jan. 28).