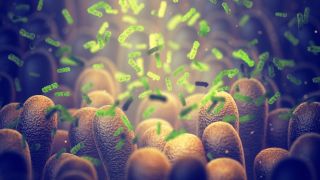 For some cancer patients, a “poop transplant” could boost the positive effects of immunotherapy, a treatment designed to rally the immune system against cancer cells.

Not all cancer patients respond to immunotherapy drugs. For example, only about 40% of patients with advanced melanoma, a type of skin cancer, reap long-term benefit from the drugs, according to recent estimates. In trying to pinpoint the differences between patients who respond well to immunotherapy and those who don’t, scientists have zeroed in on a likely suspect: the microorganisms living in their guts.

Now, a new study, published Feb. 4 in the journal Science, adds to the growing evidence that having the right gut bugs can improve a patient’s response to immunotherapy, helping to stop disease progression or even shrink tumors.

“The microbes really appear to drive the immunological … changes we see in patients,” said study author Dr. Hassane Zarour, a cancer immunologist, co-leader of the Cancer Immunology and Immunotherapy Program at University of Pittsburgh Medical Center Hillman and a professor of medicine at the University of Pittsburgh. The team linked the changes in gut bugs to changes in both tumor growth and the immune system; for instance, some of the participants showed an increase in specific immune cells and antibodies that appeared in their blood.

Despite the positive changes seen in some patients, fecal transplants likely won’t help all patients whose cancer resists immunotherapy, Zarour said. In the new study, for instance, nine of the 15 patients did not benefit from the treatment. As part of their research, the team began to sift through the differences between those who improved after the transplant and those who didn’t.

The idea for combining fecal transplants with immunotherapy first came from studies in mice with tumors, in which the rodents responded differently to the drugs depending on which gut microbes they carried, according to Science Magazine. By tweaking the mice’s gut microbiomes — the collection of bacteria, viruses and other microbes in their digestive tracts — scientists found that they could improve this response, but they weren’t sure which microbes made the difference.

Other research showed that when human patients took antibiotics, which alter the gut microbiome, they were less likely to respond to immunotherapy, providing more evidence that gut bugs make a big difference in people, too.

Having seen the positive effects of fecal transplants in mice, scientists began testing the treatment in humans, starting with a few small clinical trials.

In two such trials, led by researchers at Sheba Medical Center in Ramat Gan, Israel, patients received both fecal transplants and oral pills containing dried stool. The patients then took immunotherapy drugs called “checkpoint blockades,” which essentially rip the brakes off of immune cells and help amplify their activity against tumors. A subset of these patients, who had previously not responded to the drugs, suddenly began responding.

The new study by Zarour and his colleagues echoes these positive results, but it also starts to address a crucial question: How do gut bugs boost the effects of immunotherapy?

To answer this question, the team closely analyzed the microbes present in the donor stool samples and the recipients, before and after fecal transplants. The team also collected blood and tumor cell samples to assess the patients’ immune responses over time, and computed tomography (CT) scans, to track tumor growth. They then used artificial intelligence to find connections between all these data points.

Out of the 15 patients, nine still didn’t respond to immunotherapy after their transplant. But of the six who did respond, one showed a complete response to checkpoint blockade drugs, meaning their tumors shrunk so much they were no longer detectable; two others showed a partial response, meaning their tumors shrunk but did not disappear, and three have shown no disease progression for over a year. In all six of these patients, the microbes from the donor’s stool quickly colonized their guts, and several of the newcomer bugs that were previously  linked to positive immunotherapy outcomes increased in number.

This change in gut bacteria triggered an immune response in the six patients, as their bodies began building antibodies that recognized the new bugs; these antibodies showed up in their blood. While the link between bacteria-specific antibodies and cancer is not well understood, it’s thought that some of these antibodies can help prime the immune system to hunt down tumor cells, Zarour said.

“The bugs that increased in the responders were really correlated with positive immunological changes,” he said. These patients also built up a larger arsenal of activated T cells — immune cells that can target and kill cancer cells — while substances that suppress the immune system  decreased. For example, a protein called interleukin-8 (IL-8) can summon immunosuppressive cells to tumor sites and therefore blunt the effects of immunotherapy; but IL-8 decreased in the six responsive patients.

Links between the gut and immune system

By comparison, cells that secrete IL-8 increased in the nine patients who didn’t respond to the fecal transplant. Based on this new data, “IL-8 seems to really play a critical role in regulating patients’ responses” to the two-part treatment, Zarour said.

Compared with the six responsive patients, the nine others also showed less pronounced immune responses to the transplant and lower levels of the noted beneficial bacteria; some even had dissimilar gut microbiomes to their fecal donors, suggesting the bacteria didn’t take over their guts as seen in responsive patients.

In general, “the gut microbiome may be just one of the many reasons we don’t respond to a specific treatment,” Zarour said, so fecal transplants wouldn’t be expected to work for everyone. That said, the immune changes seen in the six responders, including the decline in IL-8, provide hints as to why it works for some people.

In the future, these results will need to be validated in larger groups of melanoma patients, as well as other cancer patients whose disease resists immunotherapy, Zarour said.

Though small, the new trial provides “firm evidence that manipulating the microbiome can yield benefit when added to immunotherapy for cancer,” said Dr. Jeffrey Weber, a medical oncologist and co-director of the Melanoma Research Program at New York University Langone Health, who was not involved in the research. Assuming these results hold up in other patients, though, fecal transplants may not be the best way to deliver helpful microbes into the gut, Weber said in an email.

The future may lie in ingesting the bacteria orally, after they’ve been freeze-dried, Weber said. This approach could include something similar to the oral pills used in other trials, for example. Either that, or scientists could isolate specific metabolites produced by the helpful bacteria and use those as drugs, Weber said. “The big question is, what metabolites from the ‘favorable’ bacterial species are actually responsible for benefit,” he said.

People with severe COVID-19 may be at risk for serious eye problems, a new study suggests.