Researchers with the National Oceanic and Atmospheric Administration (NOAA) concluded in a separate assessment that 2020 was the second-hottest year, falling just short of the record set by 2016. According to NOAA calculations, 2020’s average land and ocean temperatures worldwide were 1.76 degrees Fahrenheit (0.98 of a degree Celsius) higher than average — just 0.04 F (0.02 C) cooler than average temperatures in 2016.

By comparison, scientists at NASA’s Goddard Institute for Space Studies (GISS) in New York found that 2020’s global average surface temperatures were warmer than the 20th-century average by 1.84 F (1.02 C), tying 2020 with 2016 for the title of warmest year.

Experts at NASA and NOAA shared their assessments of 2020’s climate trends and global temperatures in a news briefing Thursday (Jan. 14) at the annual meeting of the American Meteorological Society, held virtually this year. Researchers with both agencies review the same raw data, most of it gathered by thousands of instruments on land and in the oceans, but they use different methodology and processing to arrive at their results, GISS Director Gavin Schmidt said at the briefing.

And even though NASA and NOAA ranked 2020 differently, their messages are the same: Earth is experiencing unprecedented warming, with global temperatures steadily rising over the past half-century, said Russ Vose, chief of the analysis and synthesis branch of NOAA’s National Centers for Environmental Information (NCEI) in Asheville, North Carolina.

“We’re telling you the same story about long-term change,” Vose said at the briefing.

Since the 1880s, Earth’s average global temperatures have risen 2 F (1.2 C), NASA says. For the 44th year in a row, global surface temperatures for land and sea were higher than the 20th-century average; the 10 warmest years on record have occurred since 2005, and the seven warmest have emerged since 2014.

“The last seven years have been the warmest seven years on record, typifying the ongoing and dramatic warming trend,” Schmidt said in a statement.

NOAA scientists also reported that the Northern Hemisphere experienced its hottest year ever in 2020, with temperatures that were 2.3 F (1.28 C) warmer than the 20th-century average. But some of the most dramatic impacts of Earth’s warming were seen in the Arctic. Sea-ice coverage in September, when Arctic ice extent is at a seasonal low, was about 4 million square miles (10 million square kilometers), tying with 2016 as the sparsest on record. Greenland alone loses an estimated 250 gigatons of ice mass every year “as a function of the warming climate,” Schmidt said at the briefing.

Throughout the year, temperature records were shattered worldwide. On Feb. 9, 2020, Antarctica experienced its hottest day ever, with temperatures soaring to 69.35 F (20.75 C) at Argentina’s Marambio research base on Seymour Island. Siberia sweltered under record-breaking heat in May and June, with temperatures reaching 100.4 F (38 C) — the hottest ever recorded in the Arctic — on June 20 in the town of Verkhoyansk. And the months of September and November were both the hottest on record, by around 0.36 F (0.2 C) and 0.2 F (0.1 C), respectively.

In Australia, extended drought and punishing heatwaves in 2019 sparked a record-breaking wildfire season that roared into 2020, with one megafire scorching nearly 1.5 million acres (600,000 hectares). By the season’s end, over 20% of the continent’s forests burned, killing an estimated half a billion wild animals and producing plumes that extended into the stratosphere, reaching altitudes of 18 miles (30 kilometers).

2020 was also battered by storms — 103 named storms emerged, tying the record set in 2018. Of those, 45 storms attained hurricane strength, with sustained winds of at least 74 mph (119 km/h). The Atlantic hurricane season was among the busiest and most intense ever, producing a record 30 named storms, Jim Kossin, a NOAA atmospheric scientist, said in a statement. Global warming doesn’t necessarily produce more storms, but it does make storms stronger and can lead to more frequent formation of major tropical cyclones, Live Science previously reported.

“Whether one year is a record or not is not really that important — the important things are long-term trends,” Schmidt said. “With these trends, and as the human impact on the climate increases, we have to expect that records will continue to be broken.”

“This isn’t the new normal,” he added. “This is a precursor of more to come.”

Nuclear weapons, global pandemics, accelerating climate change: Is humanity running out of time? Despite 2020’s general awfulness, humanity paused on the path forward to armageddon — at least, according to the Doomsday Clock, a hypothetical timepiece that annually assesses our nearness to utter annihilation.

Tackling the climate crisis is one of President Joe Biden’s top priorities, and NASA has created a new role to match. 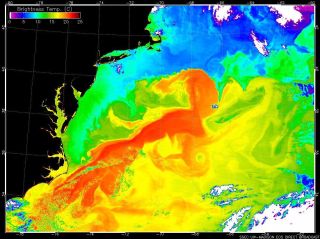