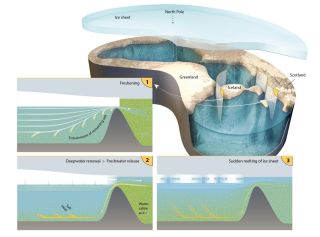 The Arctic Ocean was once a pool of fresh water capped with an ice shelf half as thick as the Grand Canyon is deep.

If that’s hard to envision, don’t despair. Scientists were surprised at the discovery, published Wednesday (Feb. 3) in the journal Nature, as well. The trick to envisioning this odd arrangement is to think about the relationship between ice sheets and the ocean. When ice sheets melt, they dump water into the ocean, raising the sea level. But when ice sheets grow, as they have during Earth‘s glacial periods, sea level drops.

Now, new research shows that in these eras of lower sea level, the Arctic Ocean’s connection to the Pacific and Atlantic was very limited, with Greenland, Iceland, and northern Europe and Siberia acting as the rim of a bowl containing the Arctic. (Ice itself could have further restricted circulation.) Land and sea alike were overlain with an ice sheet 2,952 feet (900 meters) thick.

Glaciers, river outlets and runoff from the continents kept fresh water flowing into this cordoned-off Arctic Ocean, while saltwater from the Atlantic and Pacific couldn’t get in. The exact timing of the freshening process isn’t clear, but the researchers calculated that it could have happened in around 8,000 years.

“These results mean a real change to our understanding of the Arctic Ocean in glacial climates,” first study author Walter Geibert, a geochemist at the Alfred Wegener Institute Helmholtz Centre for Polar and Marine Research, said in a statement. To our knowledge, this is the first time that a complete freshening of the Arctic Ocean and the Nordic Seas has been considered — happening not just once, but twice.”

These two periods of a freshwater Arctic occurred from 150,000 to 130,000 years ago and again 70,000 to 60,000 years ago. During these particularly cold times in climate history, an enormous European ice sheet stretched more than 3,100 miles (5,000 km) from Scotland over Scandinavia to the eastern Kara Sea, north of Siberia. Another pair of ice sheets blanketed much of what is now Canada and Alaska, and Greenland was also under an even larger ice sheet than it is today.

Until now, it wasn’t clear what the Arctic Ocean looked like at this time, because floating ice sheets leave far fewer geological traces than land-based ice sheets and glaciers. Geibert and his colleagues turned to sediment cores from the Arctic, the Fram Strait between Greenland and the Svalbard archipelago, and the Nordic seas. These long cylinders of sediment hold a stacked history of the conditions under which each layer formed.

“Here, [thorium-230’s] repeated and widespread absence is the giveaway that reveals to us what happened,” Alfred Wegener Institute micropaleontologist Jutta Wollenburg said in the statement. “According to our knowledge, the only reasonable explanation for this pattern is that the Arctic Ocean was filled with fresh water twice in its younger history — in frozen and liquid form.”

At the time, sea levels were 426 feet (130 m) lower than they are today, and parts of the seafloor topography, such as the shallow parts of the Bering Strait, were above sea level.

When the ice retreated, though, the reversal of the Arctic back to saltwater would have been rapid, Geibert said.

“Once the mechanism of ice barriers failed, heavier saline water could fill the Arctic Ocean again,” he said. “We believe that it could then quickly displace the lighter freshwater, resulting in a sudden discharge of the accumulated fresh water … into the North Atlantic.”

It’s not clear exactly how quickly the Arctic would have re-salinified, but a similar pulse may have occurred around 13,000 years ago during a cold snap called the Younger Dryas. That event raised sea level 65 feet (20 meters) over 500 years and may have actually caused the cold snap by altering ocean circulation.

This could explain some discrepancies in past estimates of sea level, Geibert said. For example, some studies of coral reef remains suggest that sea levels were higher than studies of Antarctic ice cores indicate. If freshwater wasn’t just stored on land, but in an under-ice reservoir in the Arctic, it could account for some of the gap between the estimates.

Such a freshwater reservoir would have also had its own effects on the environment around it, as may have happened with the Younger Dryas cold period later in history.

“Now, we need to investigate in more detail how these processes were interconnected,” Geibert said.

High above the North Pole, the polar vortex, a fast-spinning whirl of frigid air, is doing a weird shimmy that may soon bring cold and snowy weather to the Eastern U.S., Northern Europe and East Asia for weeks on end, meteorologists say.

The mystery of a growing “dark zone” on Greenland‘s melting ice sheet has been solved.