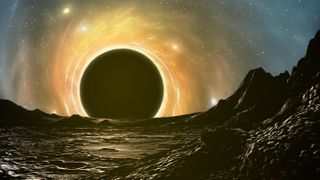 This energy-harvesting technology could leave traces just outside a spinning black hole’s event horizon — the boundary beyond which a black hole’s gravity becomes too strong for matter and energy to escape. And the process could explain at least some flares of plasma, a white-hot form of charged gas, that scientists have already detected near these massive disruptions in time and space. a new study published Jan. 13 in the journal Physical Review D proposes.

And while it’s only a science-fiction idea at the moment — the nearest black hole to us is thought to be more than 1,000 light-years away, which is too far to be reached in many human lifetimes — if astrophysicists could ever work out a method of tapping these cosmic behemoths, rotating black holes could become a near-limitless source of energy for a technologically advanced civilization.

The co-author of the study, astrophysicist Luca Comisso of Columbia University in New York, said the next step will be to figure out what deliberate extraction energy from a black hole might look like to distant observers.

“We have only done the physics in this paper,” he said. “But I am now working with a colleague of mine to apply this to reality, to look for civilizations, to try to see what kind of signal you would need to look for.”

This is the fourth time in 50 years that a new way to suck energy from a spinning black hole has been proposed. The most famous is a 1969 study by the renowned physicist Roger Penrose, who won the Nobel Prize in physics in 2020 for his work on black holes.

He proposed a mechanism known as the Penrose process, in which a particle breaks in two just beside a black hole rotating at near the speed of light. Part of the particle then falls through the ergosphere, a chaotic region of space-time just outside the black hole’s event horizon, before falling into the black hole itself.

“Because the black hole rotates so fast, it drags space-time around like a vortex,” Comisso said.

According to the calculations, objects falling into this ergosphere can have negative energy, which is not possible anywhere else in the universe. “This is the only tiny region where this can happen,” Comisso said.

While in his original study, Penrose considered only a single particle that splits in two, the latest research considers astronomically sized plasmas generated in the accretion disk around a black hole — the often massive and super-hot disk of doomed matter that orbits most black holes. Because plasmas have huge  number of particles, they could yield correspondingly huge amounts of energy.

In theory, black holes also “evaporate” over time by giving off Hawking radiation — a quantum mechanical concept proposed by the physicist Stephen Hawking — but that process is too faint to have yet been detected, Comisso said.

Comisso and co-author Felipe Asenjo, an astrophysicist at the Universidad Adolfo Ibáñez in Santiago, Chile, suggest the plasmas for extracting energy from a spinning black hole are created by “magnetic reconnection” events — where intense magnetic field lines tangle, break and rejoin — just outside its event horizon.

Magnetic reconnections are commonly seen on the surfaces of stars like our sun, where they release tremendous amounts of energy as plasma flares that move in diametrically opposite directions, Comisso said.

While the plasma flares created on stars fall back into the star or jet off into space, the ergosphere of a rotating black hole would mean a falling jet of plasma could acquire negative energy, while its corresponding escaping jet gains additional energy, effectively from the black hole itself, he said.

The new study challenges a 1977 theory for extracting energy from black holes proposed by astrophysicists Roger Blandford and Roman Znajek. They suggested that the magnetic fields near a spinning black hole don’t reconnect, but instead generate additional angular momentum in the escaping plasma jet — a type of “electromagnetic torque.”

Both the new theory and the Blandford-Znajek theory could now be tested to determine which is the most effective for extracting energy from a rotating black hole, Comisso said.

“In the future, people will do supercomputer simulations of both cases and there could be a comparison,” he said. “But at the moment, it is not clear.”

Whichever theory proves correct, it could help astronomers better estimate the spin rate of black holes and quantify the energy given off by plasma jets near their event horizons, he said.

The universe may be filled with “mirror” particles — and these otherwise-undetectable particles could be shrinking the densest stars in the universe, turning them into black holes, a new study suggests.