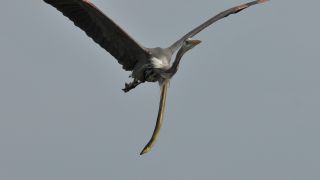 A heron likely regretted eating an eel after it burst out in midair.
(Image credit: Sam Davis)

Update, Dec. 17 at 2:40 pm EST: Live Science has learned that the animal dangling from the heron is an American eel (Anguilla rostrata), not a snake eel. American eels are common in Delaware waters and along the U.S. Atlantic coast, according to the Delaware Department of Natural Resources and Environmental Control (DNREC). “It is rare for a heron to swallow an American eel that big and even rarer for the eel to burst out of the heron,” a DNREC fisheries biologist told Live Science.

The original story, posted Nov. 10, is below.

A snake eel fighting for its life pulled an “alien” move by bursting out of the stomach of a heron that had just swallowed it whole, according to photos snapped by an amateur photographer in Delaware.

The photos show the snake eel, its head dangling in midair, as the heron — looking surprisingly unbothered — flies onward.

The unusual event attracted a lot of attention among the local predators, said Sam Davis, an engineer from Maryland who took the photos on the Delaware shore. Several juvenile eagles and a fox were following the heron, possibly hoping to scavenge a meal in case the heron or the snake eel didn’t make it, he said.

When Davis first spotted the bizarre flight, he thought that a snake or eel had bitten the heron’s neck. Davis was about 75 yards to 100 yards (68 to 91 meters) away from the animals, but he had a telephoto lens for long-range photography, and so he shot photos as he watched the heron fly about and even land in the water with the eel still attached to it. “The heron didn’t seem to act much differently,” Davis told Live Science. “It was in the water and flying around.”

Meanwhile, the eel was arching its body, “so i guess it was still alive at some point,” he said.

It wasn’t until Davis returned home and edited the photos that he realized that the snake eel wasn’t biting the heron. After enlarging the photos, “I could see the eel, you could see its eyes,” he said. “It was actually coming out the other end” — headfirst.

The photos show “a pretty amazing sight,” said John Pogonoski, an ichthyologist with the Australian National Fish Collection at the Commonwealth Scientific and Industrial Research Organisation (CSIRO), who wasn’t involved with the heron and snake eel’s encounter. “I would think this is either very rare or very rarely seen in a bird species, at least as far as I am aware.”

Earlier this year, Pogonoski and his colleagues published a study in the journal Memoirs of the Queensland Museum on snake eels (a fish from the family Ophichthidae), detailing how snake eels can burrow out of the guts of fish that prey on them. “But usually they don’t get very far,” he told Live Science in an email. Once swallowed, snake eels can use their hard heads or tails to bust out of the digestive tract, but usually end up in the predator’s body cavity, muscle tissues or swim bladder. Once trapped, snake eels often “become ‘mummified’ or ‘encysted’ [closed up in a cyst] and die rather than escape,” he said.

In one instance, “a co-author of the paper once discovered a live snake eel inside a fish he caught when he cleaned the fish to eat it,” Pogonoski said.

Davis never learned what happened to the heron and snake eel photographed in Delaware in 2011 (he uploaded the photos to a wildlife site only a few months ago). When he left the shore, the heron was still flying around with the snake eel hanging below it.

According to Pogonoski, “the heron possibly survived, it didn’t look too inconvenienced, but would depend on how well the wound healed and if it was able to avoid an infection.”

As for the snake eel, it “would only have survived if it was dropped over or very close to water with a salinity it could normally tolerate,” he said.

Brown tree snakes can turn their bodies into lassos to shimmy up power poles and trees — a superpower that has allowed the species to invade new territory, new research has found.

Sea cucumbers — those chubby tubes of flesh that scooch around the ocean floor — have a very special talent: The tubular creatures are elite poopers, collectively expelling more than 70,000 tons (64,000 metric tons) of sandy poop out of their bottoms each year.

A nearly-life-size depiction of a kangaroo — realistic genitalia included — is the oldest known rock painting in Australia. Scientists recently pinpointed its age to 17,300 years ago with a technique that had never been used on Australian ancient art before: measuring radioactive carbon in wasp nests from rocks near the artwork.

A oft-spoken piece of advice cautions those celebrating with a bottle of bubbly; allegedly, champagne makes you drunk faster than other beverages with similar alcohol content. But how much truth is there to this statement? In other words, do you need to exercise extra moderation with the champagne this Valentine’s Day?