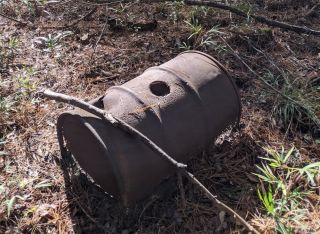 Archaeologists in South Carolina have uncovered the remnants of a 1920s-era moonshine still that may have been run by one of Al Capone’s criminal associates.

While digging in a wooded region known as “Hell Hole Swamp” (part of South Carolina’s Francis Marion National Forest) outside Charlottesville, the researchers discovered a metal barrel, a green garden hose, cinder blocks and various pieces of scrap metal, according to South Carolina’s Post and Courier.

Despite their motley appearance, these artifacts are likely remnants of an illegal liquor-distilling operation run by a notorious local bootlegger and Capone associate named Benjamin Villeponteaux, said Katherine Parker, a graduate student at the University of Tennessee Knoxville who led the expedition into Hell Hole Swamp, as reported by the Post and Courier.

“As archaeological sites, defunct or busted liquor stills are often mistaken for modern trash dumps,” Parker wrote on her website. “However, there are several key signatures that can be used to distinguish them.”

The cinder blocks are one of those signatures. Parker called in an architectural historian to analyze the blocks’ size and materials, and found they dated to the 1920s. According to Parker, these bricks likely supported a “submarine-style” liquor still, in which hundreds of pounds of rye, barley, sugar and water were raised over a fire and brought to a boil inside a metal container. A separate apparatus, connected by a hose, would have drawn out the alcohol vapors and condensed them into a liquid again.

This newly uncovered still is just one of several in Hell Hole Swamp that archaeologists have linked to Villeponteaux. According to Parker, the local bootlegger owned property near the forest, and he is believed to have worked with Capone to help the infamous gangster run illegal booze out of South Carolina during Prohibition.

A 1926 newspaper article reported that Villeponteaux was one of three men killed during a bloody shootout with a rival gang of bootleggers called the McKnight family. However, the liquor stills of Hell Hole Swamp may have gotten many good years of use after Villeponteaux’s death, and perhaps even after Prohibition was repealed in 1933, according to the Post and Courier. South Carolina taxed legal liquor at $4 a gallon, making it one of the steepest state taxes in the nation; bootlegging continued to thrive, and the state became a stronghold of illegal booze production, the newspaper reported.

The earliest megalithic circle at Stonehenge was first built in the west of Wales more than 5,000 years ago, before its stones were dug up and dragged over 140 miles (225 kilometers) to its present site in the west of England, new research suggests.