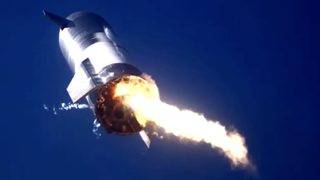 During a livestream of the launch over Boca Chica, Texas, the private spaceflight company was quick to emphasize that perfection was not the point of the test. John Insprucker, SpaceX’s principal integration engineer, stressed that the company had successfully lifted its giant experimental vehicle — reaching 160 feet (49 meters) tall and 30 feet (9 m) wide — to an altitude of 32,800 feet (10 kilometers), before gliding in a controlled manner to its destination, where it exploded on impact on a landing pad in Boca Chica. The same type of explosion happened during an earlier, Dec. 8 test of SN8, which is the eighth Starship prototype and the first of the series to reach that altitude. (The prototype launched today was named SN9.)

“Again, we’ve just got to work on that landing a little bit,” Insprucker said.

Starship launched vertically, then turned off its three engines one at a time to slow before reaching its target altitude. Then, it dumped its oxygen and flopped onto its side to glide Earthward using its stubby wings. Then came the maneuver that caused problems in December as well: Righting itself and re-firing its engines to produce the upward force needed to slow down before landing. (SpaceX’s smaller Falcon 9 and slimmer Falcon Heavy rockets routinely pull off a similar trick during commercial operations, though they also sometimes exploded during testing, as Florida Today reported in 2014.)

The December landing failed because the rocket did not slow enough before touchdown. It’s not yet clear what caused the Feb. 2 explosion, though the vehicle appeared to be moving very fast and to have not fully righted itself during the last moments of the livestream. Kenneth Chang reported for the New York Times that it appeared one of its engines didn’t properly ignite, leaving the craft landing at an angle rather than upright.

SpaceX has pitched Starship as a vehicle big enough to haul large crews or heavy loads to the moon and Mars, and the company already sold tickets to Japanese billionaire Yusaku Maezawa on a future Starship for a swing around the moon, as the BBC reported.

To pull off a trip to the moon or Mars, Starship will need crew quarters and life-support systems, as well as a “Super Heavy” booster rocket to push the vehicle into space. The Super Heavy has not yet been built.

SpaceX got clearance for today’s launch despite news that its Dec. 8 attempt had violated the terms of its Federal Aviation Administration test license, according to The Verge. The company’s Starship investment also once drew the ire of NASA as a distraction from the Crew Dragon project, as Live Science reported in 2019. But the agency has since a made $135 million investment into Starship, as Spaceflight Now reported.

Categories: News
Tagged: ., according to The Verge, as Florida Today reported, as Live Science reported in 2019, as the BBC reported, reported for the New York Times, Spaceflight Now reported