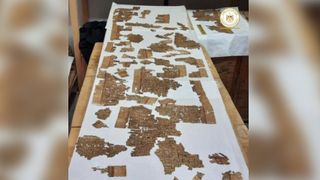 A 13-foot-long (4 meters) copy of chapter 17 of the Book of the Dead was found in the burial shafts. The name of the papyrus’s owner Pwkhaef is written on it. The Book of the Dead helped guide the deceased through the afterlife.
(Image credit: Egyptian Antiquities Ministry)

Made of stone, the temple has three mud-brick warehouses on its southeastern side that held offerings made to the queen and her husband.

Near the pyramid, the team of Egyptian archaeologists also found a series of burial shafts containing the remains of people who lived during the 18th and 19th dynasties of Egypt (1550 B.C. – 1186 B.C.), the ministry said in the statement, which was released Jan. 16. These burials were likely part of a Teti-worshipping cult that formed after the pharaoh’s death. The cult seems to have remained active for more than a millennium, with people wanting to be buried near the pharaoh’s pyramid. So far, the team has uncovered more than 50 wooden coffins in these shafts, along with a wide array of objects.

Book of the Dead

One of the most fascinating objects found in the burial shafts is a 13-foot-long (4 meters) papyrus that contains Chapter 17 of the “Book of the Dead,” a manuscript that ancient Egyptians used to help guide the deceased through the afterlife. The name of the papyrus’s owner, Pwkhaef, is written on it; that same name was also found on one of the wooden coffins and on four shabti figurines meant to serve the deceased in the afterlife.

Though scientists are currently analyzing the text, other copies of Chapter 17 contain a series of questions and answers — a cheat sheet of sorts for people trying to navigate the afterlife. Whether the newly found copy of Chapter 17 has the same question-and-answer format remains to be seen.

Inside the burial shafts, the archaeological team discovered a stela that belonged to a man named Khaptah, who is identified as the overseer of the pharaoh’s military chariot, and his wife, Mwtemwia. The top part of the stela shows the couple paying homage to Osiris, the Egyptian god of the underworld, while the lower part shows the couple seated on chairs with six of their children in front of them. Their three daughters are shown seated and smelling lotus flowers, while their three sons are shown standing.

The archaeologists aren’t certain which pharaoh(s) Khaptah served. It’s possible that he served Ramesses II (who reigned from 1279 B.C. to 1213 B.C.), a pharaoh known for his military campaigns that expanded Egypt’s empire as far north as Syria. An inscription on the stela says that two of Khaptah’s children are named after family members of Ramesses II. One of Khaptah’s daughters is named Nefertari(the same name as Ramesses II’s main wife) and one of his sons is named Khaemweset (the same name as one of Ramesses II’s sons).

Board games and mummies

Other discoveries in the burial shafts near the pyramid included a bronze ax, board games, statues of Osiris and several mummies, including the mummy of a woman who appears to have suffered from familial Mediterranean fever, a genetic disorder that causes recurring fever and inflammation of the abdomen, joints and lungs.

A shrine dedicated to Anubis — the god of the cemetery — was also found near the burial shafts, as were statues of the god.

The Egyptian team that made the discovery includes archaeologists from the Egyptian antiquities ministry and the Zahi Hawass Center of Egyptology at the Bibliotheca Alexandrina.

Nearly five millennia ago, an artist inked an incredibly detailed painting of geese in the tomb of an Egyptian vizier and his wife. This “Mona Lisa” of ancient Egypt may depict a previously unknown and now extinct species of goose, a new analysis suggests.