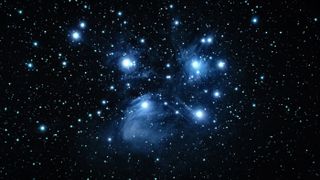 The Pleiades star cluster is also called the Seven Sisters. It may have gotten that name from the oldest story ever told.
(Image credit: LazyPixel/Brunner Sébastien via Getty Images)

People both modern and ancient have long known of the Pleiades, or Seven Sisters, a small collection of stars in the constellation Taurus.

But this famous assembly could point the way to the world’s oldest story, one told by our ancestors in Africa nearly 100,000 years ago, a speculative new study has proposed. To make this case, the paper’s authors draw on similarities between Greek and Indigenous Australian myths about the constellation.  But one expert told Live Science that similarities in these myths could be pure chance, not a sign they emerged from a common origin.

The Pleiades are part of what astronomers call an open star cluster, a group of stars all born around the same time. Telescopes have identified more than 800 stars in the region, though most humans can spot only about six on a clear, dark night.

Yet cultures around the world have often referred to this constellation with the number seven, calling them the “Seven Sisters,” “Seven Maidens” or “Seven Little Girls.” This head scratcher has puzzled many scientists, such as astrophysicist Ray Norris of Western Sydney University and Commonwealth Scientific and Industrial Research Organisation (CSIRO) Astronomy and Space Science in Australia.

Norris has worked with Indigenous Australians and learned many of their sky stories, including those of different groups who identify the Pleiades as seven girls being chased by the constellation Orion, who is a hunter in these tales. This storyline is extremely similar to the one in ancient Greek legends about these constellations.

The case isn’t entirely surprising, given that both Orion and the Pleiades are bright and prominent celestial features, and that Earth‘s rotation makes it look to us like the former is chasing the latter across the night sky. Some researchers have tried to explain the narrative resemblance through simple cultural exchange, said Norris, given that Europeans arrived in Australia more than two centuries ago. But such a timescale is not long enough for the story to have become so deeply embedded across different, far-flung Australian cultures, he added.

Norris noted that one of the Seven Sisters — a star known as Pleione — is often lost in the glare of a nearby star called Atlas, making it invisible to most human eyes. But 100,000 years ago, when humans were first emerging from the African continent and spreading over the world, the two stars would have been more separated in the night sky, perhaps accounting for why the Pleiades are named for seven beings in many stories. In other words — our ancestors who had not yet left Africa first came up with the tale, then carried this story about the night sky with them as they migrated to Europe, across Asia, and eventually to Australia.

“You’ve got these two bits of circumstantial evidence,” said Norris. “Together they make an interesting hypothesis.” Along with a co-author, he posted a paper Jan. 25 about this possibility to the pre-print database arXiv. Their study has been accepted to, but not yet published in, a peer-reviewed journal.

While noting that it’s a “fun and evocative idea,” astronomer and archaeo-historian Bradley Schaefer of Louisiana State University in Baton Rouge, who was not involved in the work, did not think the explanation likely.

“Humans are humans,” so they will populate the sky with male and female figures. By chance alone, about half the time, you would expect a given constellation to be associated with men, and half the time with women. Which means that “about one-quarter of that time, Orion will be masculine and the Pleiades will be female,” Schaefer said.

Given the huge number of traditional stories, simple coincidences between any given two cultures are likely to crop up, Schaefer said. He also pointed out that the Norris paper used outdated stellar positioning information to model the distance between Pleione and Atlas 100,000 years ago. The correct data places them two times closer during this epoch, meaning there wouldn’t be much significant change in how the constellation appeared to our ancestors.

Norris’ paper doesn’t entirely hinge on this fact, mentioning that the stars in the Pleiades are thought to vary with brightness, and perhaps 100,000 years ago one of the very faint stars was much more visible, though no one knows how much these stars vary in brightness over the long-term.

It’s possible the hypothesis is correct, Schaefer said, but the available evidence isn’t very convincing. It provides a “lesson of what it takes to prove something like this,” he added.

He gave as a counterexample the Big Dipper, another well-known constellation, that cultures across Eurasia describe as a bear. In this case, evidence suggests at least some tales about the Big Dipper likely did emerge from a common origin story, he said.

For instance, in a significant number of these, the “ladle” of the Dipper is given as the body of the bear, and the three stars of the “handle” are identified as its tail (though bears don’t have long tails.)

Yet in many of the traditional stories of Siberian people in Eastern Russia, where people also recognize the Big Dipper as a bear, there is an alteration. The ladle is still the bear’s body, but the three stars of the handle are branded as three hunters chasing the bear. Mizar, the central star of the handle, has a small faint companion known as Alcor, and in the Siberian stories Alcor is a bird helping lead the hunters to the bear, Schaefer said.

A significant number of Native American tales, told by peoples spread across the North American continent north of the Rio Grande, have a very similar setup for the Big Dipper — including the bear, hunters and steering bird, he added. Given that a great deal of other evidence shows that humans migrated over an ancient land bridge in the Bering Strait between modern-day Russia and Alaska thousands of years ago, Schaefer thought it was much more likely that these Big Dipper stories share a common origin.

Even this explanation is not universally accepted by archeo-historians, he added. But the many shared “characteristics mean that it is an evocative, fun, and likely true story,” he said. It might not be the titanic 100,000-year suggested timespan of Orion and the Pleiades, but having a tale that’s at least 14,000 years old is still quite impressive, Schaefer said.

“That makes the Great Bear the oldest intellectual property of humanity,” he said.

Earth’s second moon will make a close approach to the planet next week before drifting off into space, never to be seen again.