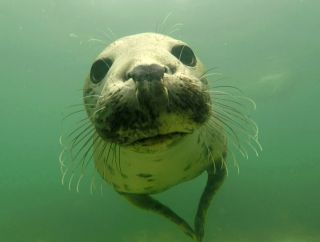 With a novel coronavirus devastating the world since the spring, the year 2020 has been difficult. Still, even in these hard times, some moments of joy crept through  — and some of them were sparked by awe-inspiring scientific discoveries and phenomena. From the incredible efforts of scientists to develop a COVID-19 vaccine in record time to clapping seals and swimming dinosaurs, here are 10 ways that science made a sucky year suck less.

This year, scientists across the globe undertook a massive and unprecedented effort to develop vaccines to fight the novel coronavirus; and they did so on unprecedented timescales. Less than a year after the mysterious cluster of pneumonia-like illnesses in Wuhan, China were identified, scientists have developed 223 candidate coronavirus vaccines to fight the virus that caused it; 57 of these vaccines are already being tested on humans, according to the WHO. Two of the  vaccines are already being deployed in the U.S.; those harness a relatively new technology based on a synthetic strand of genetic code called messenger RNA that primes the immune system to fight the novel coronavirus. The COVID-19 vaccines developed by Pfizer and Moderna, are 95% and 94.1% effective, respectively. What’s more, experts say this technology could be a game changer for vaccine development in the future.

Almost 100 years after critically endangered blue whales nearly went extinct due to industrial whaling, they have returned to the waters of South Georgia island near Antarctica. Only a single blue whale  had been sighted between 1998 and 2018 in this area, which was once a center for industrial whaling until the practice was banned in the 1960s; about 42,000 blue whales were killed around South Georgia between 1904 and 1971. But a recent survey came back with some very hopeful news: Scientists aboard a research ship in January and February of 2020, counted dozens of blue whales that had returned to the area. In total, they detected 58 individual blue whales, according to a  study published Nov. 19 in the journal Endangered Species Research. “We’ve had indications in previous years that there might be more blue whales starting to come back to South Georgia,” marine mammal ecologist Susannah Calderan told Live Science. “But we were very favorably surprised by quite how many we did see this year.”

Scientists have detected a mysterious, unexplained chemical in the upper atmosphere of Venus, and suggested that it could be a sign of life. The chemical, a phosphine gas (PH3), is made on our planet by bacteria and by “anthropogenic activity,” or activities that humans are doing. Phosphine also exists in the atmospheres of gas giant planets due to known chemical processes. But no such chemical process is known to exist on Venus. Still, don’t go looking for E.T. on Venus just yet, as phosphine could have been made by a chemical process that’s just unknown to us, the researchers wrote on Sept. 14 in the journal Nature Astronomy.

For the first time, a seal was recorded clapping (or slapping its flippers together) in the wild, unprompted by training or treats from zookeepers, according to a study published in the journal Marine Mammal Science in January. This particularly entertaining creature was male gray seal swimming (and clapping) near the Farne Islands in northeast England. Only male seals appear to clap, and they tend to do so when other seals are nearby; this clapping seal was swimming near a female and a male seal. So biologists are guessing that the gray seals either clap to get mates or to shoo away competitors.

Dinosaurs were not thought to swim. That is, until this year when researchers discovered a paddle-like tail in southeastern Morocco that belonged to a predatory, sharp-toothed dinosaur called Spinosaurus aegyptiacus. This new tail, which was tall and flat like a fin, is reminiscent of the ones found in modern crocodiles, the researchers reported in April in the journal Nature. Still, researchers say that because the fossils were found inland, this dinosaur was likely more comfortable on land and just swam in shallow waters, without straying too far.

Male lemurs produce a fruity scent in their wrist glands, rub it on their tails and waft a scent cloud towards a potential mate. Male lemurs commonly use such secretions to communicate with other males to mark their territory, demonstrate social rank or announce that they’re ready to breed. But scientists recently discovered that they also use these chemicals to “stink flirt” with females. Typically, secretions from the wrist glands smell “bitter,” “leathery” and “green,” but during breeding season they smell “more fruity, floral and sweet,” the authors wrote in a paper published  in April in the journal Current Biology. This might mark the first evidence of sex pheromones in primates.

‘Great conjunction’ of Jupiter and Saturn

On Dec. 21, Jupiter and Saturn appeared so close together in the night sky that they looked like one star. This rare phenomenon, called the “Great Conjunction,” occurs every 20 years but the two gas giants haven’t been this close to each other since July 16, 1623, when the famous astronomer Galileo Galilei was alive. The last night sky where Saturn and Jupiter appeared so close together, was in 1223.

A grey parrot named Griffin has outsmarted 21 Harvard students in a classic memory game, according to a study published in May in the  journal Scientific Reports. African grey parrots (Psittacus erithacus) can live for more than 50 years and were always known to be impressive; they can memorize dozens of words, after all. But now Griffin has shown that impressive is an understatement. Researchers gave Griffin and the Harvard students a memory task in which he had to find a colorful pom-pom under a plastic cup after it was shuffled around the table several times. Griffin did as well or better than the students in 12 out of 14 trials. To locate the pompom both Griffin and the students were using a feature of their working memories called “manipulation,” which based on Griffin’s amazing performance, may be an evolutionarily ancient capability, according to the researchers.

A recently discovered 9,000-year-old burial of a female hunter, and other analyses of hunter burials, suggested that early hunter-gatherer women in the ancient Americas hunted big game just as much as men did. These findings suggest that the accepted story of ancient men hunting big game while women gathered herbs and plants is not always true. “These findings sort of underscore the idea that the gender roles that we take for granted in society today — or that many take for granted — may not be as natural as some may have thought,” lead author Randy Haas, an assistant professor of anthropology at the University of California, Davis, told Live Science. The team identified 429 skeletons from different ancient burial sites across the Americas; 27 of the skeletons were buried with big-game hunting tools. Among those buried with big-game hunting tools, 11 were female (including the newly discovered female) and 15 were male,  according to a study published on Nov. 4 in the journal Science Advances. Further statistical analysis suggested that between 30% and 50% of hunters in these populations were female. “What we see is that female and male burials are just as likely to be associated with big-game hunting tools,” Haas said.

Another strange tale of 2020: octopuses sometimes punch fish, because why not? Big blue octopuses (Octopus cyanea) sometimes work with fish in order to find food. But sometimes when they’re displeased with those fish, or don’t want to share the jointly-hunted food, they use a “swift, explosive motion with one arm,” in other words, punch them in the head, according to a new study published Dec. 18 in the journal Ecology. “I laughed out loud, and almost choked on my own regulator,” lead study author Eduardo Sampaio, a Ph.D. student at the University of Lisbon and the Max Planck Institute of Animal Behavior, told Live Science in an email. His later reactions were more subdued, “but I still marveled at it every time I saw it,” he added. The researchers observed this behavior eight times between 2018 and 2019 while diving in Eilat, Israel, and in El Quseir, Egypt.

In a handful of instances, the U.K. coronavirus variant has developed a mutation that may help it evade current vaccines, according to news reports.